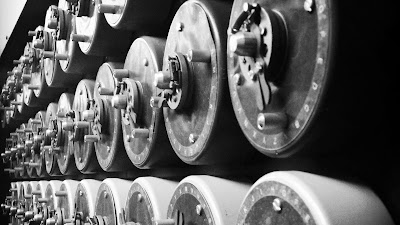 Rather impressed with this. Not only did Bremont put on an extremely fun (and generous) event*, but they failed to disappoint when it came to the big reveal. I was only able to see the watch though the various glass displays dotted around the grounds of Bletchley Park, but a few things stood out to this #watchnerd:

Bletchley Park (like the National Museum of the Royal Navy last year) seemed totally on board. They’d opened up the house, grounds and museum for the event, and seemed genuinely interested in the watch. At least three of the original BP staff were there at the event, along with Jerry Roberts MBE the last survivor of the cryptanalysts who worked on Tunny. Mr Roberts spoke for a few minutes about his time at Bletchley working with Bill Tutte and Tommy Flowers, as well as Alan Turing. He was particularly eloquent when it came to describing the impact of Flowers’ endeavours: “He changed the way the world works…” 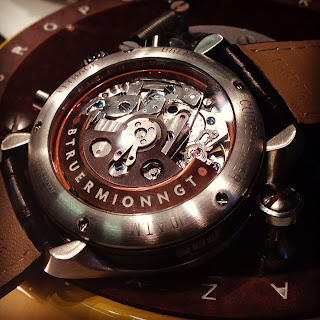 The movement: Bremont have been “modifying” movements since the ALT1-C was released in late ’07 (a DD module atop the 7750, if I remember correctly). The Victory watch from last year contains a little-used La Joux-Perret movement – the 8310 – which is definitely a step up in terms of innovation / inventiveness. The Codebreaker incorporates a module from (one presumes) the same manufacture, given the nomenclature (BE-83AR). This chrono movement moves the sub-dials from 3/9 to 4.30/7.30, while adding a flyback complication and GMT. From the back, it’s quite familiar looking, although the Bomb-inspired rotor is quite clever. I like the way that the “rabbit ears**” have been ported across, as well as the bakelite-style movement spacer that echoes the colours of the drums. I’d like to get a little closer to this movement, and to see it operating. Bremont have received an undertaking from the manufacturer that no more than 300 of these movements are to be made, thus making it truly limited. 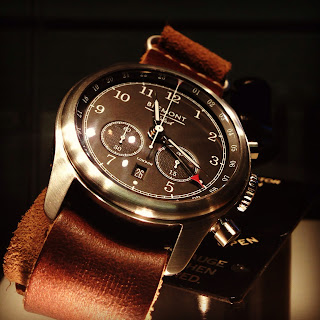 The dial: the dial is simple, black and has no nod to BP apart from a fairly subtle use of binary code on the two sub-dials. Each is ringed by a white rail-track motif (echoed on the main dial). The GMT track is clearly visible, and although the sub-dial markings are scarce, the 30-minute totaliser should be eminently usable. Three small, circular markers replace the numerals at four, six and eight, avoiding the need for “eaten” numbers. The date is nestled between the two sub-dials in an unobtrusive manner, balancing the dial nicely. To be honest, I’m not really a fan of off-centre sub-dials, preferring them to be based on a central line, but the bilateral symmetry of the Codebreaker dial is surprisingly pleasing to the eye. With its bright red-tipped GMT hand the only spot of colour on the dial, it’s an austere nod to earlier watches, while maintaining Bremont’s modern design cues. 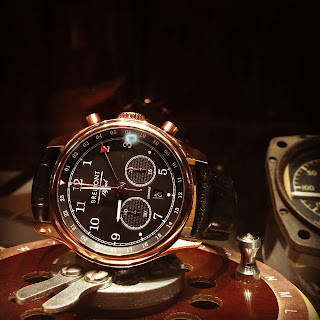 The case and bezel: the tried and tested Trip-Tick® case is given a subtle facelift again. Like the Victory before it, the Codebreaker features Bremont’s distinctive three-part design, with two notable changes: the addition of an external limited edition number, marked in coated pieces of original BP punchcards; and a slight rounding of the bezel. I’ve not yet been able to study the watch, nor seen it against the Victory, but it appears to have a slightly more rounded bezel than the Classic models, which seems to give it a softer look than, for example, the ALT1-C. The slimmed down crown incorporates a small piece of Hut 6 – the area of BP devoted to breaking German Air Force and Army Enigma codes. There’s a good photo of it here, on Piers Berry’s Alt1tude Forum. This is probably the one element of the watch that could have drifted over the line into parody. However, it actually seems to work rather well, and feels consistent with the rest of the design.

The Codebreaker is available in both hardened stainless steel (240) and (non-hardened) rose gold (50) and costs approximately £11k or £18k, depending on the model. As with the Victory, a proportion of the profit from each watch will be donated to the Bletchley Park Trust. Finally, if you haven’t already visited Bletchley Park, please do consider it. BP is under an hour from London Euston and just a couple of minutes from the station.

*In the spirit of disclosure, we were guests of the Bremont Watch Company, and enjoyed their hospitality, as well as receiving a “goody bag” from them containing a white silk scarf, some fruit cake and some lemonade. We paid for our own transport.