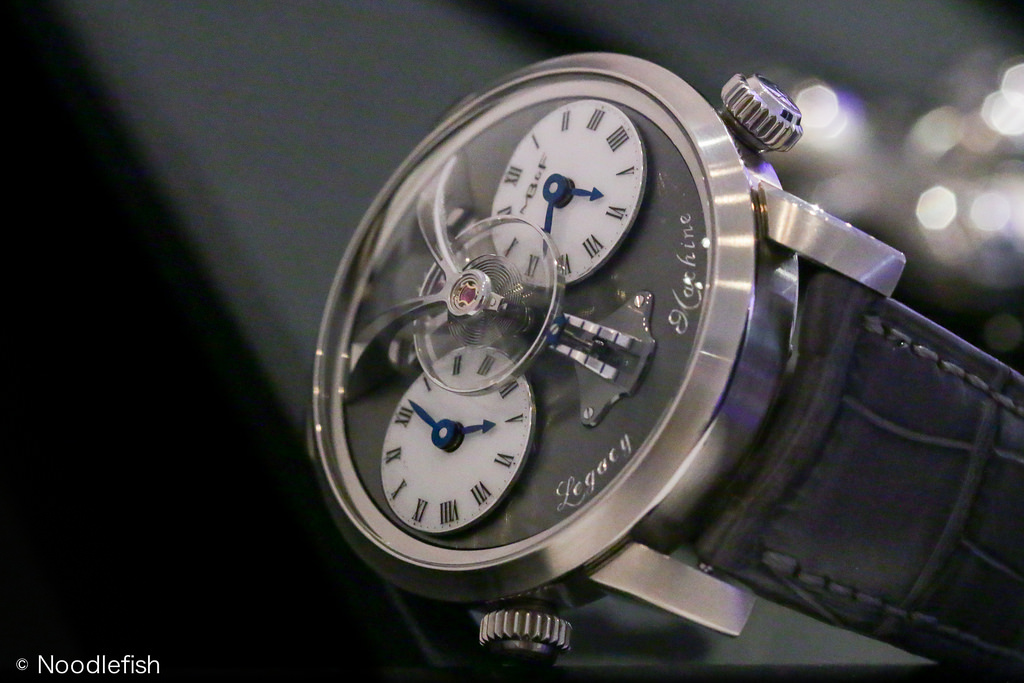 Designs of futures past

There was a time when watches were micro-mechanical models of the future – sweeping curves cast in highly polished gold or steel – devices to take you boldly where no person had gone before. These were the days of the Hamilton Taurus, the Gemini and the Savitar II, whose asymmetric cases pointed firmly to the future. Within a couple of years, Hamilton would also give us the X-01, a prop for the seminal science fiction film 2001, a Space Odyssey, as well as the QED, an LED watch that, subconsciously, may have echoed HAL’s unflinching, red eye. Hamilton even spun-off an LED-specific brand, Pulsar. Pulsar, a name so cool it was bought by Seiko in 1978 and relegated to a sub-Lorus backwater. These were the days of Disney, of EPCOT – the experimental prototype community of tomorrow – Walt’s utopian vision of the way we would live. The way we could live.

The X-01 prop watch wasn’t a production model (although limited editions of the watch were to be sold some 40 years later). Hamilton and John Bergey (creator of the first digital watch) had been asked by Kubrick’s team to come up with designs for the 1966 movie**. The resulting cuff-shaped watch contained not only a standard analog dial, but also three porthole windows, through which digital numbers could be seen. These represented the month, the day and GMT. The watch also included a movable internal bezel, with a second 12-hour time scale to record elapsed time. Looking at the watch today (the original prop is on display at the NAWCC) the design is not timeless; rather, it’s an example of the retro-futurism that was so prevalent during the sixties; a largely positive, utopian view of the world, complete with comfy chairs and Pan-Am flight attendants.

Something else happened in the late seventies that was to have a lasting effect on watch design, although I’m not sure that was obvious from the beginning. Star Wars Episode IV: A New Hope opened in the summer of 1977 to rather mixed reviews. The late Roger Ebert, most famously, appeared to have liked it, describing the mix of narrative and suspension of disbelief as an “out of body experience”.  Within two years, another slightly out of body science fiction movie was released, Star Trek: The Motion Picture. Without ST:TMP, and the subsequent ST2:TWoK, I doubt we would have seen the Next Generation, Deep Space Nine, Voyager, or Enterprise spinoffs, nor the more recent reboots. Because of this, or perhaps despite of this, Star Trek has become, arguably, the most culturally influential television series of all time, while Star Wars has had a similarly impressive cultural impact, influences that can be seen, quite clearly, in many modern watches, clocks and even music boxes.

Of these watches, it’s the deceptively simple URWERK UR-101 from 1997 that stands out to me: a gold-cased jump-hour, with direct read, wandering minutes. In many ways, it’s reminiscent of the Lord Elgin watches that were popular four decades earlier, or the “chronoscope” pocket watches from the 18th and 19th centuries. However, this watch was actually inspired by one of the most famous spaceships of all time:  the Millennium Falcon.

The lower lugs jut from the circular case like the twin “prows” of the Falcon (which is said to be based on a half-eaten hamburger next to an olive on a toothpick) while the strap is slung between them as normal. The entire watch is canted forward on the wrist by the slightly raised rear lugs, which are integrated into the caseback. It’s a fun thing – futuristic, yet antique – drawing on the past in a considered way, yet already looking like a piece of forgotten retro-futurism (or something that may have fallen through the Kefahuchi Tract).

From a design point of view it manages to be both practical as well as beautiful, interesting (the deceptively simple movement actually required a new cam and two discs to be produced – one for odd and one for even numbers – but few other modifications) and romantic. There’s something rather wonderful^^ about watching the hours move across the dial, just like Khepri pushing the sun across the firmament.

Max Busser also has one eye on the past. During a brief chat with him at SalonQP a couple of years ago, he described the MB&F LM1 as a watch that a 19th Century watchmaker might have made were he/she to have access to today’s technology. Or was it the watch he would have made had he been born a century earlier? Some might describe that as steampunk****, gonzo historical, or (perhaps) gaslight romantic, but the effect (whatever the moniker) is remarkable. The balance has been relocated from its traditional location to sit atop the watch, hanging, suspended from an arm above the two enamelled dials like the saucer in The Day the Earth Stood Still. Or rather, a Vernian saucer, or perhaps a Victorian Ray Palmer drawing.

Busser (like fellow CEO Manuel Emch) is inspired by experiences from his childhood, whether it be the first time he saw an Antide Janvier clock, or the car books he read while growing up. That his watches are as likely to be an homage to a Lamborghini Miura as they are to Phillippe Dufour’s double escapement is testament to this; he has raided the distant past and the near present, borrowing equally from the 18th or the 20th centuries, while maintaining that most enviable of traits, conceptual integrity. Surrounding himself, as he does, with such stellar friends must be both a help and a hindrance – on the one hand, he is aided by some of the most talented individuals in the industry. On the other, autant des têtes, autant d’avis. With such friends, I’m amazed that he’s able to maintain his concepts within the boundaries of design.

There remains a certain charm in classical watch design: the language of Breguet, for example, appears to be a lexicon that is as relevant today, as it was in 1775. I read some comments recently about a new watch with a coin-edged case; which suggested that this had been copied from Breguet. I’m unable to tell you whether Breguet did, in fact, produce the first coin-edged case for a wristwatch, but it’s good to know that ‘blog readers are still conversant with the classics. The LM1 is in many ways more akin to a pocket watch than a wristwatch. It is large, almost comically so on my wrist, although it is only 44mm across and a mere 16mm from caseback to the top of its remarkable dome. Yet it would (probably) be recognisable, and perhaps more importantly understandable as a concept, to Ferdinand Berthoud.

This ability to meld the past and the present is enviable. Rather than produce the forward-looking objects of the past, both of these watches seem to embody a ‘pre-distressed antique futurity.’ I’d probably also include some of the de Bethune watches in this camp, as well as, perhaps, Vianney Halter (although Vianney’s watches seem to me to sit either in the predistressed camp (Trio) or futurity (Deep Space Tourbillon) but the one watch that does attempt both (the Antiqua) doesn’t quite have the same romance as, for example, De Bethune’s DB29).

Atemporality, from a design point of view, is a difficult thing to encapsulate. As William Gibson once Tweeted, our “bleeding-edge Now is always someone else’s past. Someone else’s ’70s bell bottoms.” The Deep Space is, perhaps, too grounded in the world of Star Trek to have attained the required atemporal escape velocity (much like MB&F’s marvellous homage to the same space station). The aforementioned De Bethune DB29 Maxichrono Tourbillon is another watch that  harnesses the designs of the past whilst looking firmly forward. The watch, a five-handed chronograph, will hopefully be on the stand at SalonQP this year, along with Vianney, URWERK and MB&F, and I hope to be able to learn more about the ideas and decisions behind their designs during the event.

I often wonder whether anyone actually sets out to create the timeless; I don’t even know whether any of the watches featured in the post were designed to invoke a sense of time, or rather timelessness. Perhaps it’s just me. It usually is.

**Richard Arbib also submitted a design for the 2001 watch – the Hamilton Flight II. His was remarkably similar in function to the Bergey design chosen by Kubrick, although the form was more reminiscent of his earlier Hamilton electric watch models, such as the Pacer or Ventura

*** I’ve never managed to get my hands on a UR-101; should any reader have one, and be in London, I’d gladly treat them to a burger of their choice in exchange for a glimpse…

**** I don’t think it is steampunk. While steampunk implies an anachronistic setting, it’s rare to see today’s technology simply transplanted back to 1849 (unless it’s a time travel story, which is probably a different genre)