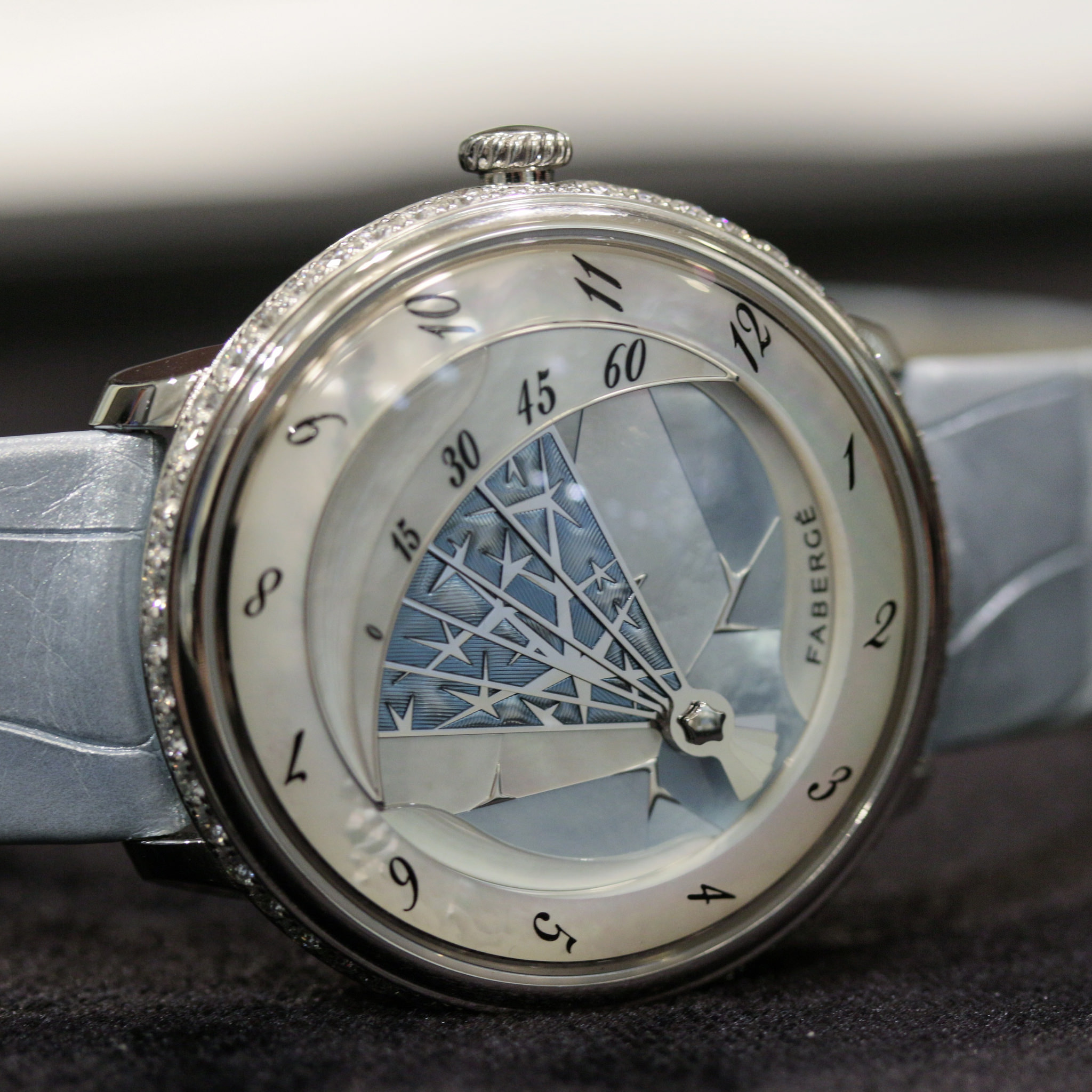 Last month, my friend and fellow ‘blogger @horologium suggested that we visit the Fabergé boutique on Grafton Street, ostensibly to see the new DTZ (Dual Time Zone) watch designed by  Jean-Marc Wiederrecht. However, it was the Lady Compliquée Winter that stole the show.

This watch, which uses the same Agenhor AGH-6901 movement as the previously released Peacock version, displays time via a rotating hour ring and series of retrograde blades. In the Winter watch, these blades are beautifully lacquered shards of blue snowflakes, that slowly fan open as the hour progresses. It’s a charming piece, and a wonderful complication, powered by an exceptional movement (for more about the watch, its movement and to see it in action, please read Elizabeth Doerr’s piece on Quill and Pad).

Fabergé blends cutting edge movement design with historical references (the Winter watch is a nod to the Faberge egg of the same name, that sold for a (then) record price in 2002). The person behind this extraordinary piece, and many others (including the DTZ men’s watch) is Aurélie Picaud. Ms Picaud hit the ground running in 2013, by all accounts, assembling a list of names to support her vision: Giulio Papi, master engraver Dick Steenman, Jean-Marc Wiederrecht at Agenhor SA  and Vaucher Manufacture, to name but a few. The results speak for themselves.

They say you should never meet your heroes. Well, I met one of my newest at the Eve’s Watch Women’s Watch Awards: Elizabeth Doerr introduced me to two members of the Faberge watch team, one of whom was Ms Picaud. I must admit to making a complete mess things, and I didn’t even recognise her initially (as both of my readers will know, I’m the consummate idiot).

Ms Picaud was wearing a stunning 36mm Lady Levity – a watch which is as beautiful as it is surprising. The large pearlescent central disc contains a wonderful rendering of the man in the moon that has been “printed” onto the dial using a proprietary process. I’d heard about the technique during my visit to the Boutique, but hadn’t actually seen the watch. In theory, any design could be reproduced on the dial (within reason) allowing infinite customisation or a completely bespoke client experience.

The hands too are exquisite. There’s a soft curve to the moon that plays against the spikiness of the sun hand as they orbit that large central disc. The watch is a simple two-hander, with each hand being propelled through space by another Agenhor movement – the manually wound AGH 6911. I didn’t get to see the movement – surely it’s rude to ask a lady to remove her watch? – but will try and get a closer look when the watches are released later this year.

It’s obvious that Ms Picaud has an eye for design, and another for historical influences (I’m sure there’s an early 20th century Faberge desk clock with a similar motif, but I can’t seem to find a photo).

In a world that seems overly obsessed with the finer details, I’m embarrassed to admit that this story had largely passed me by. Perhaps this is due to missing Basel in both 2015 and 2016.

I hope not make the same mistake again in the future.