HMS Victory is the only surviving warship that fought in the American War of Independence, the French Revolutionary War and the Napoleonic wars. In the latter she served as Lord Nelson’s flagship at the decisive Battle of Trafalgar in 1805 and she continues to be flagship of the Second Sea Lord. That she should play host to the launch of a watch that not only shares her name, but also original parts of her superstructure, was something more than a little special. So when I received an invite to this event from Giles and Nick English at Bremont, I jumped at the chance. Travelling down from London with numerous proper watch journalists (including representatives from #watchnerd favourites QP Magazine and 00/24 Watchworld), I must admit to feeling more than a little inadequate. But back to the watches…

The Victory Watch stems from Bremont’s close association with the Navy, through working previously with the Fly Navy Heritage Trust and the Royal Navy Historic Flight. However, from the sounds of it, Admiral Sir Jonathon Band, GCB, DL, Chairman of the Trustees of the National Museum of the Royal Navy, wasn’t going to let just anyone waltz off with original parts of the oldest naval ship still in commission. Luckily for Bremont, they passed muster, and were granted unprecedented access to parts of the wooden superstructure and even a copper nail. These parts have been used in both the trademark Bremont mid-barrel (see right) and the caseback of the Victory watch (above).

The watch itself marks something of a departure for the guys from Henley-on-Thames: not only does it use the most complicated mechanical movement within any Bremont watch to date, but it is also their first foray into the world of precious metals. For the Victory is available in both a Limited Edition of 200 stainless steel pieces, as well as 40 in 18 carat rose gold (at left). As you can see from the photos, the watch shares many of the features that have become associated with Bremont watches: the TripTick three-piece construction, showing off the beautiful curved lugs; an easy-to-read, textured dial that seems both modern and reminiscent of marine chronometers; a railway-style track above the minutes; and even a red triangle on the rehaut at twelve o’clock. It’s a very Bremont watch, combining the best of the new with a great deal of the old.

The caseback contains some of the most wonderful details that I’ve seen in a long while. Bremont were able to borrow Nelson’s seal – the seal he wore on the Victory – and produce a cast from it. From there, they found one of the last places in the UK that is still engraving glass, and commissioned them to etch the seal, in reverse, onto the sapphire display back.  The rotor is also highly-decorated. The photo to the right is from Bremont, and I’m just sorry that I haven’t been able to get a closer view of it. 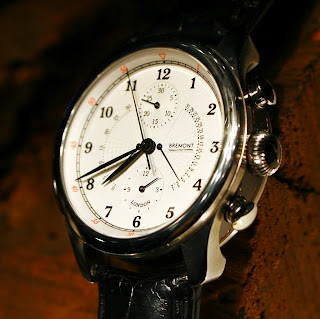 The movement is very interesting: it’s a chronograph with double retrograde running seconds and date, known as the Bremont BE-83AR. A little bit of #watchnerd-fu shows few other movements that fit this description: the cal. 831 used by Chronoswiss in their well-received Balance Chronograph (based on the La Joux-Perret 8310) being the only other one I could find. It’s a fascinating movement to watch, and I’m sorry I haven’t managed to get a video of it. The running seconds run up the left-hand side of the dial, flicking back to zero when they hit the 30 second mark. The retrograde scale on the right of the dial shows the date. As mentioned previously, there are relatively few people using this movement at present, so it remains a bit of an oddity. La Joux-Perret (formerly known as Jaquet), and part of the wider Prothor Group) have recently been purchased by Citizen. The hands are rather good too, with a very fine chronograph seconds hand and a set of well-balanced hours and minutes. I don’t believe that there is any lume on the dial at all. All in all, it’s a remarkable watch: bold, beautiful, brilliant. And all that, while wearing a piece of history on your wrist. I’m not sure it gets much better than that.

The Bremont Victory will be available in the Autumn, at a little under £12,000 for the stainless steel model, and a shade under £20,000 for the rose gold version, although I think you’d better get your pre-orders in quickly.