Keeping up with the Jones’…

A few weeks ago I had dinner with an Australian Twitter pal who was wearing a watch called the Time Traveller from UK brand, Mr Jones Watches. It’s a limited edition of 100 pieces with a rather ingenious 24hr world timer function, using a single rotating dial and powered by a one jewel Ronda quartz movement. The dial is marked with iconic buildings / landmarks from around the world, each of which represents a timezone: if you’re in London, you use Big Ben as the hour hand; in Dubai, track the passing of time with the Burj Khalifa; or let the Golden Gate Bridge be your guide in San Francisco. It’s rather cool, to be honest, and even has a small, red pigeon to mark the minutes. I also rather like the case design, with its slender, slightly bombé lugs and flush crown. It’s elegant, rather modern, but with a vintage flourish. Each of the Mr Jones watches is (initially) limited to 100, with later (non-limited) editions being altered slightly, so as not to devalue the original version.

To be honest, I hadn’t thought much more about Mr Jones until the other week, when I was visiting Cockpit Arts in Clerkenwell. Cockpit is home to many extraordinary designer-makers, including jeweller Ruth Tomlinson, ceramicist Shan Annabelle Valla, Thornback & Peel, bespoke shoemakers CarréDucker and illustrator Fanny Shorter. Fanny’s series of life size prints of the World’s Smallest Birds has been a source of joy for some time, playing to my love of all things zoological as well as being quite charming pieces of art in their own right. It also turns out that she’s also been designing 24-hour-themed packaging for Mr Jones: as Fanny explains, “the mayfly larvae emerge from the water, metamorphose into mayfly, mate, lay their eggs and die, all in a matter of 24 hours. The Day Lily blooms for only 24 hours and has to be pollinated within this period.” 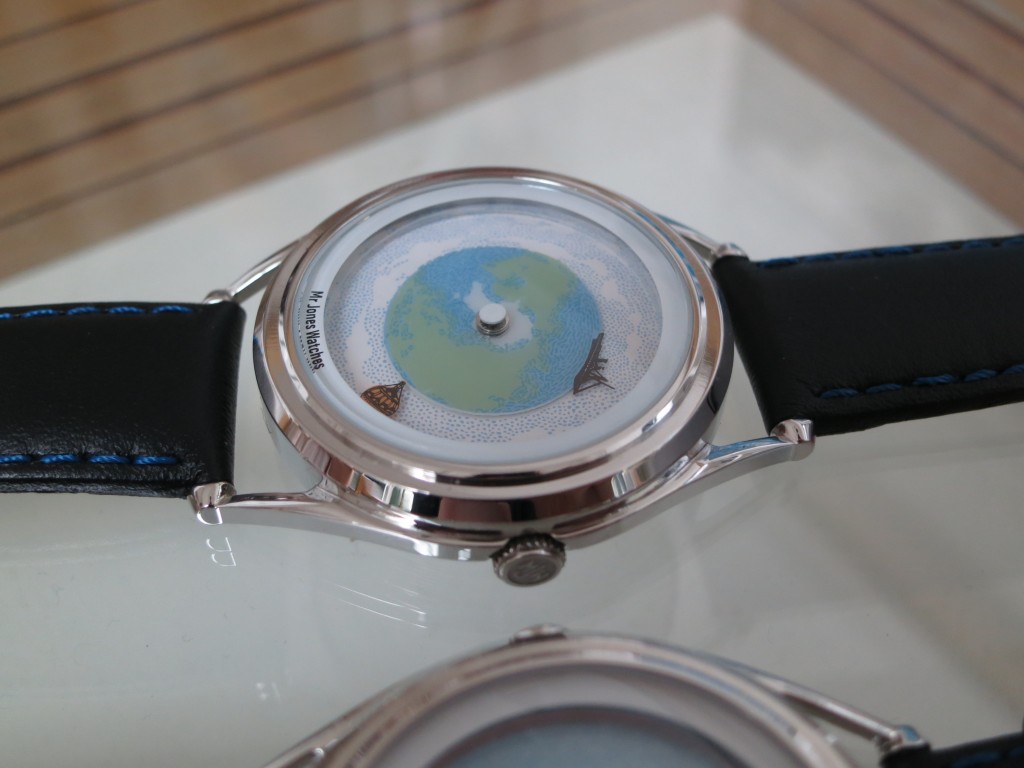 However, the #watchnerd overlap doesn’t stop there: Fanny has designed her first watches with Mr Jones, inspired (I believe) by Jules Verne’s 20,000 League Under the Sea and Round the World in 80 Days. The latter depicts a balloon (minutes) and  steamship (hours) circling the globe, on separate, printed rotating dials, against a pointilist background – the Tour du Monde. This is, I believe, the first time that the dials have been printed by Mr Jones in London. The prototypes / early production models were on display yesterday so I took the opportunity to take a few photos of them. They look fantastic: ingenious and beautiful are words that are seldom used to describe watches, and (probably) even more rarely used to describe “fashion watches”, but I’m willing to go out on a limb here and say that these, simple, 37mm, 5ATM WR, one jewel quartz watches are two of the most interesting, fun and desirable pieces I’ve seen all year (please see small set on Flickr, here).

The second watch is the Captain Nemo-themed Vingt Mille, replete with giant squid, in whose huge tentacles are clutched a hapless seaman (perhaps this chap from the original Verne drawings?) and an axe-wielding Nemo.

When speaking to Fanny about her design, it was clear that a great deal of thought goes into each of these seemingly simple creations: as the two discs rotate, the various tentacles move around the face of the watch, and in relation to the central body of the monster cephalopod mollusc, while never  completely covering the minute / hour hands. This kinetic design process is quite different to the (fairly) straightforward multi-colour screen prints of, for example, Pelvicachromis pulcher (‘Kribensis’) or the Common Wood Pigeon. As some of you may know, I’m a Zoologist by “training” and still have a slight love of most marine invertebrates (certain isopod sea lice excluded). To find a watch that arguably captures the spirit of 20,000 Leagues better than Thomas Prescher, Vianney Halter or Romain Jerome – and in such a playful, and artful manner – is extraordinary. That it should come from such an unexpected source is equally exciting. It may only be a quartz movement, but it demonstrates, to me at least, that design-led watches from British brands such as Mr Jones, Benjamin Hubert and Uniform Wares, even if they are, predominantly made in China, should not be ignored. The price of this slightly Cthulhu-esque cephalopod wonder? Approximately £175. Will the #watchnerd be buying one. Absolutely.

Note: this piece was written the weekend of the Cockpit Arts Open Studios. Since then, I note that Mr Jones has released a model called The Last Laugh, which features specially commissioned artwork by British tattoo artist Adrian Willard. The watch is a jump hour, powered by a Chinese ST1721, 20 jewel automatic movement. Not bad for a watch that costs £215.