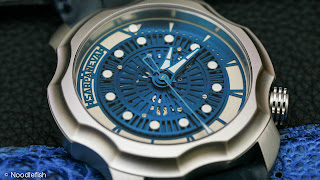 One of the most enjoyable aspects of SalonQP 2012 was being able to spend time with some of the people behind the watches that we ‘blog, Tweet or write about, such as Finnish watchmaker, Stepan Sarpaneva. I’d been hoping to meet Stepan for a number of years, as he has quietly been making some of my favourite watches, such as the Korona K0 (opposite). The K0 is a 300m dive watch with  one of my favourite “complications”, an internal bezel. Like the Aquastar Geneve Seatime watches from the 60s and 70s, Stepan has integrated the internal bezel into the watch in such a way that it can be controlled from the single crown at four o’clock. The crown (below) is beautifully crafted, mirroring the scalloped stainless steel case. 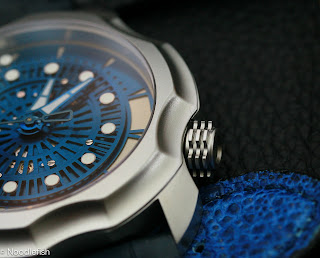 The bezel (or diver’s timer ring, as Stepan calls is), is manually adjustable from the first crown position, which may give an indication as to how he does it: the date ring on the modified Soprod A10 Calibre has been replaced by a timer ring. It’s a very neat solution and one that exemplifies Stepan’s (slightly oddball, to use a phrase coined by Sarpaneva as part of a 10th anniversary publication) approach to watchmaking. The Korona K0 is inspired by a Finnish legend about a smith, whose  daughters were taken by a Näkki, a shapeshifting water spirit who usually appears in human form, and resides in murky pools, wells, docks, piers and under bridges that cross rivers. Stepan’s work is littered with such references to water, Finnish folklore and the moon, with which he appears to have a particular relationship. “The moon bothers me,” he says, “Even when I cannot see it, I can feel it. During the Full Moon and the New Moon, I’m especially sensitive. I seep badly… Am I cursed?” 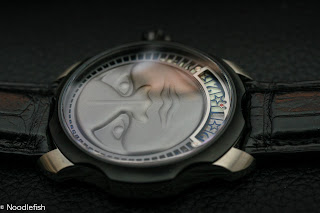 I don’t know whether Stepan is, indeed, cursed, but there’s no doubt that his relationship with the moon influences his work. The Korona Moonshine (opposite) is perhaps the most extreme of his pieces – the entire dial has been given over to face of the moon, while hands are relegated to a rotating, lumed, skeletonised hour wheel. The lumed part indicates the lunar month, while the hour wheel tells the time. My friend and fellow #watchnerd, Horologium, is also a huge fan, and has recently purchased a moon pendant from Stepan. I think it’s this combination of technical, very exact watchmaking and the whimsical that I find so intriguing, and, indeed wonderful, about Sarpaneva’s watches.