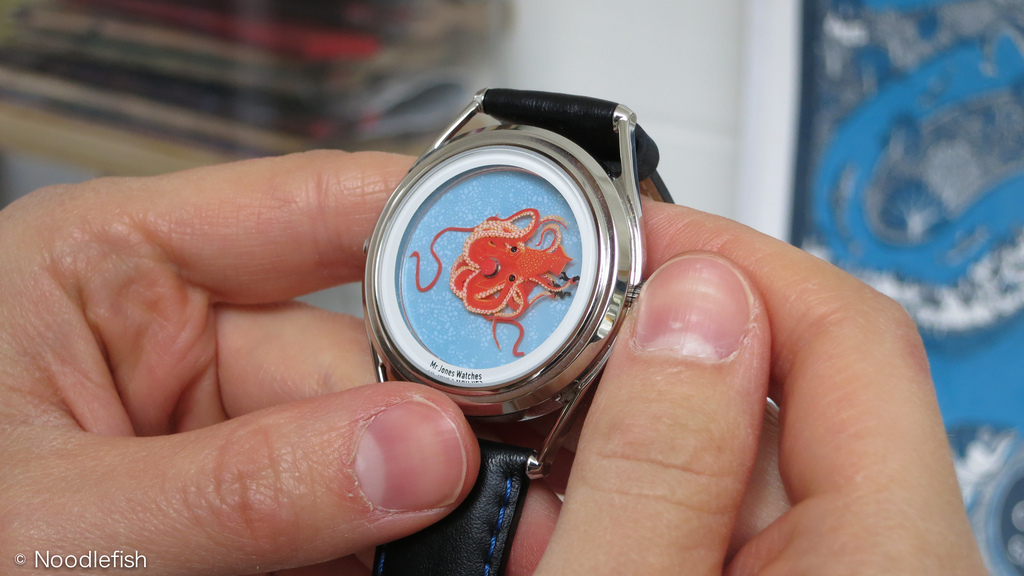 Watches aren’t meant to be amusing: watches are serious items to be collected, locked away; an investment. They certainly shouldn’t make you smile. Well, not unless you’re able to buy cheap and sell high; this isn’t a hobby, after all, this is a business. Gordon Gekko (for example) had a really cool watch, a Cartier if I remember correctly, and we *all* know about the residuals on those.

Or maybe watches are just status symbols; items of conspicuous wealth; wrist real estate for oligarchs. A secret handshake for the meta-Masons? Perhaps. I’ve always believed that most watches are to be worn, experienced, enjoyed.

This view appears to be shared with at least some of the people and brands with whom I’ve had contact over the years. I’m not talking about throwing your Patek in a pool, or taking your Greubel-Forsey up a mountain, but watches almost always look better on a wrist, rather than in a safe. And while it’s still far too easy to put haute horlogerie on a pedestal, there is often a sense of observable playfulness when watchmakers gather. Take SalonQP for example – the Independents Gallery might have been cathedral-like: crisp white walls, black microfibre gloves and reverential tones. But instead, Stepan, Kari, Tim and Bart combined to produce a vibrant hub of activity; there was even dancing. Perhaps.

The fun side of watches can sometimes be lost; I’ve just learnt that the owner of one of the most well-known of watch ‘blogs will shortly be published for the first time. The title of this tome? The World’s Most Expensive Watches. It appears to contain a Daniels – a co-axial chronograph – although Roger Smith’s watches don’t appear to have made the Top 100. Breguet hardly gets a mention, and Mudge, Dent and Harrison are omitted entirely. Cost may not always be a good indicator of greatness. As Kurtz might have said: the horror! The horology!

However, there are people to whom the amusing side of watchmaking does, at least, appear to be not only relevant but essential. Take, for example, London-based designer and watchmaker Crispin Jones. He believes “a watch should do more than just tell the time – it should start a conversation, make you think or just make you smile.” Mr Jones’ Watches are relatively cheap (the priciest is currently £350 / $580, with the average piece selling for £160 / $265) and a lot more fun than the majority of watches on the market. I should come clean and tell you that I own two – one based on Jules Verne’s 20,000 Leagues Under the Sea (the Vingt Mille, which is now available as a non Limited Edition) and a second, slightly more esoteric mystery-dial, called the Baitball. Both watches were designed by illustrator and artist Fanny Shorter (I’ve written about Fanny and Mr Jones previously).

When George Daniels described watches as amusing, I’m not sure to what he was referring. At the Sotheby’s auction of Daniels’ collection in 2012, there was a suprising inclusion: among the marine chronometers, the prototypes containing co-axial escapements and the rare books, was a Trafalgar. This lot eventually made £813 – and was purchased by Richard Hoptroff. The reason it was such a surprising inclusion? It’s a talking quartz watch. Perhaps it was this to which George was referring – a cheap, base metal and plastic novelty, that presumably sat alongside the pocket watches, clocks and watchmaking tools within the Riversdale studio. A toy amongst the tourbillons.

This is the final post in the series – the subjects were suggested by six small words that appear on the trailer of The Watchmaker’s Apprentice** – historic, intellectual, technical, aesthetic, amusing, useful. I’m sorry it’s taken so much time. After all, time is that most precious of commodities to those who devote their life to measuring it.

**For the new, longer trailer, please see above