Thomas Prescher is a difficult man to describe. On the one hand, he’s a technical watchmaker with an extraordinary pedigree. A prodigy, he worked with Richard Habring on a half-flying one minute tourbillon while an apprentice at IWC. On the other hand, he’s a steampunk visionary, with a gift for designing wonderfully esoteric and often whimsical pieces like the NEMO Sub about which I briefly wrote last month.

It is this combination of horological brilliance and extreme creativity that I wanted to explore when I visited his small workshop in Twann, just outside Biel/Bienne earlier this year. Thomas was in the midst of a move, transferring his watchmaking equipment from the old workshop to a live/workspace under his family home; even so, he picked us up from the station and drove us the few short miles to Twann, a small village known for its neolithic settlement discovered in the 70s and the Trüelete, an annual wine festival. 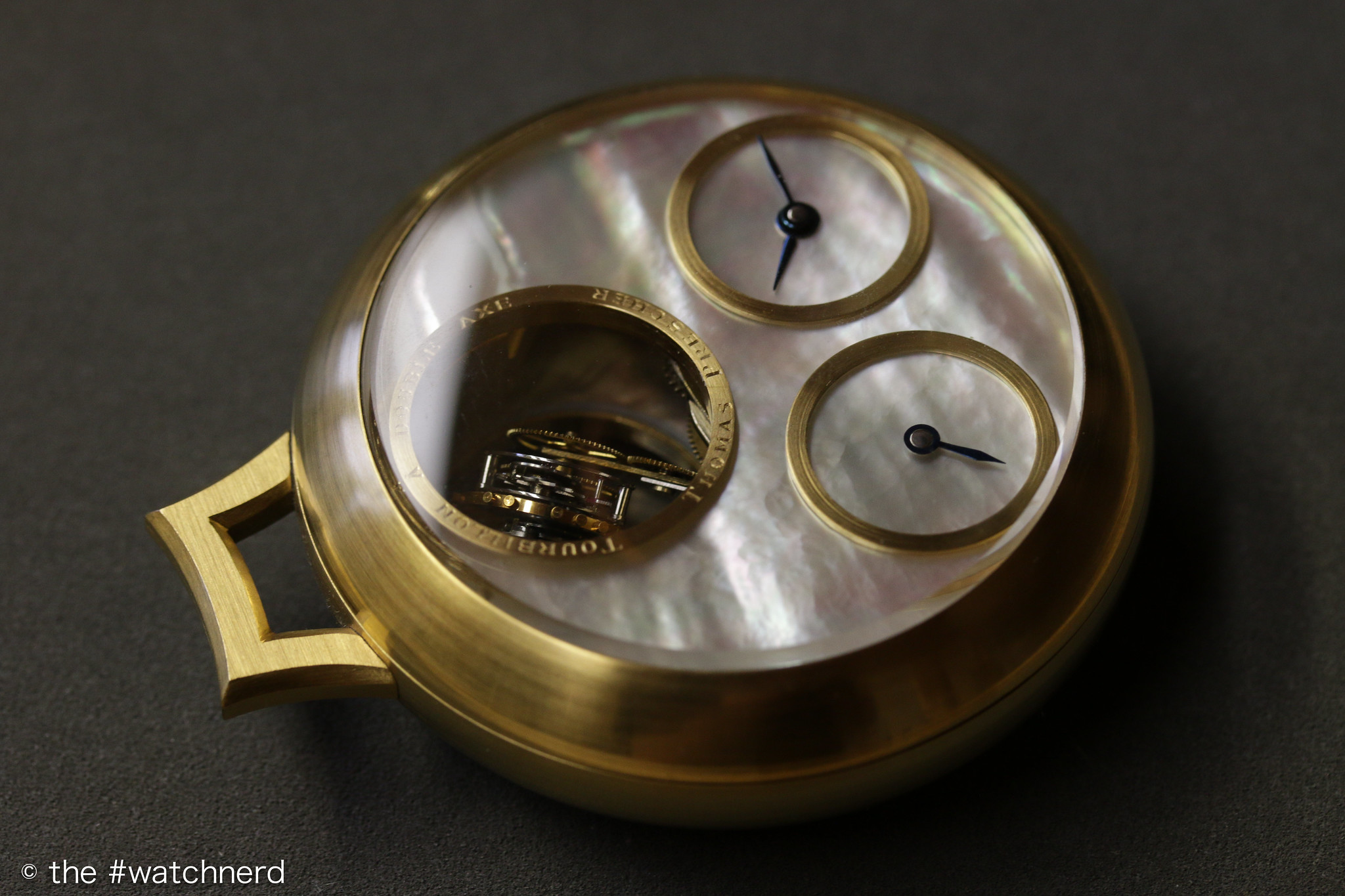 Thomas’ first watches were, perhaps, a little ahead of their time; the public, it seemed, was not quite ready for a pocket watch with double axis tourbillon. Instead of retreating into a more simple model, Thomas calmly added a third axis, creating one of the most complicated, if not the most complicated, watch of its time. Building on the sixty second carriages of the double axis, the third axis rotated at a rate of once every sixty minutes. A decade later, such multi-axis tourbillons seem almost commonplace, with everyone from Jaeger LeCoultre to Girard-Perregaux producing variations on the theme.

Thomas had began his apprenticeship working at IWC. Completing his four year training a year early, he was noted for his prodigious abilities and self-belief. During this time, he became obsessed with the work of Anthony Randall and Richard Good, and went on to build a constant force double axis tourbillon – the first of its kind. Unusually, he was also quite active on the first PuristsPro, and many of his posts can still be read online. 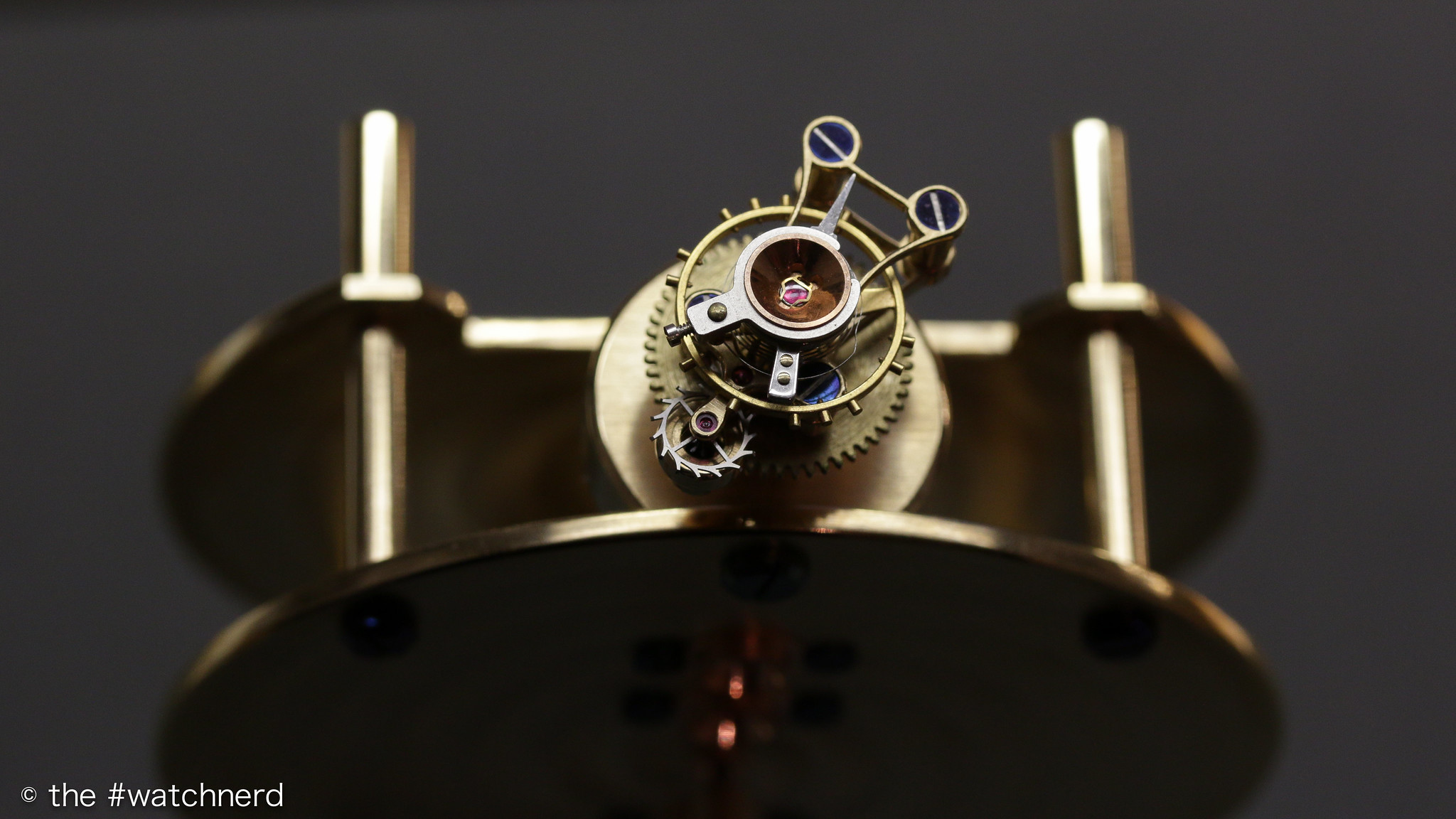 Walking around the small workshop in Twann, it becomes immediately clear that Thomas does not have a huge army of staff working for him. He flits from one area to another, pointing out the solid steel bars from which cases can be cut, demonstrating how to heat-blue hands, showing us the the massive Hauser jig borer, and the large galvanising tubs for watch dials and plates. But there’s an elephant in the room: a computer numerically controlled behemoth, a CNC machine. In many ways, the increasing use of CNC machines is an unspoken secret in the world of independent watchmaking.

“I need this to do extraordinary things.” 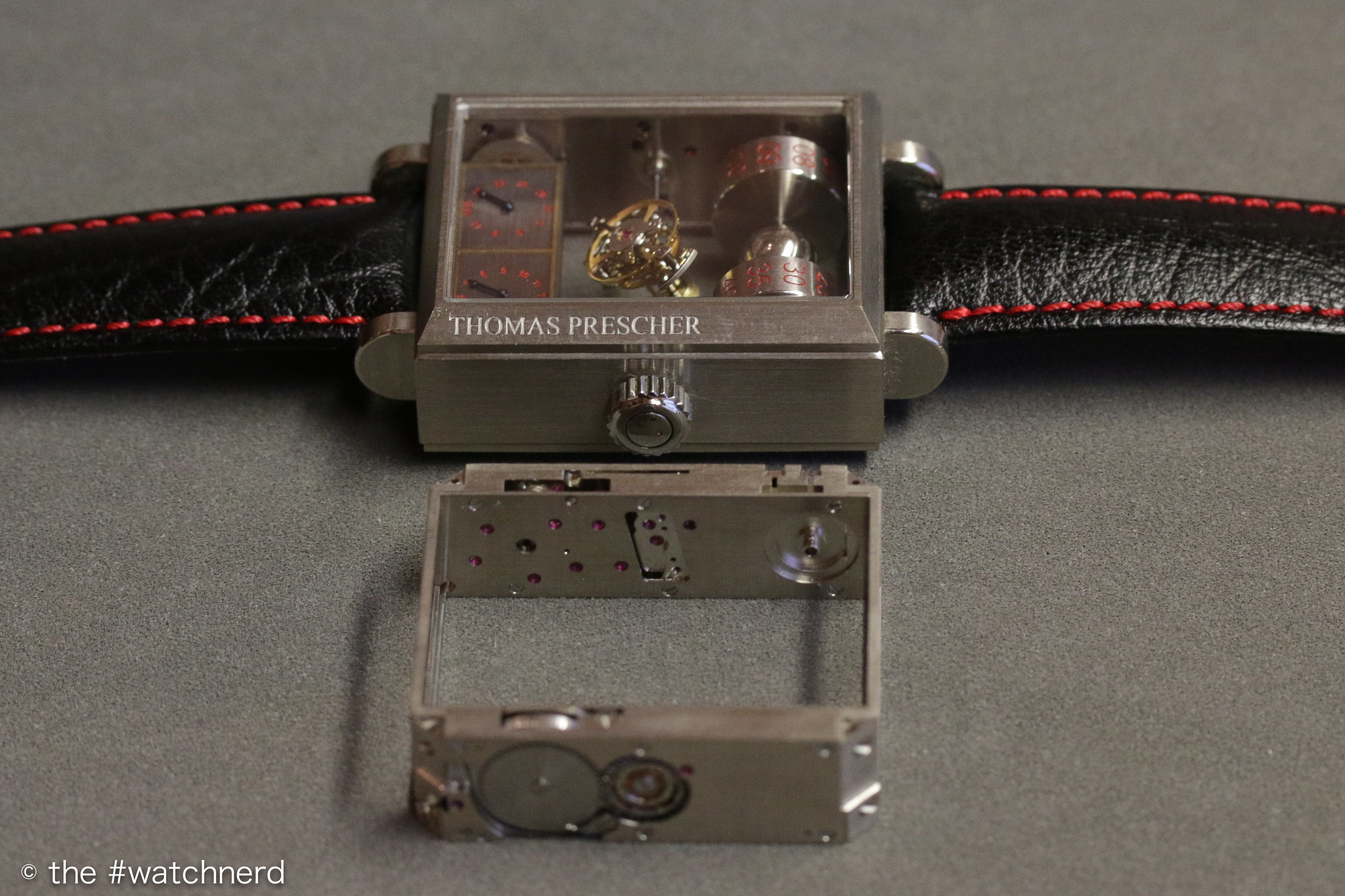 The “mysterious” double axis tourbillon is one of my favourite pieces: the tourbillon cage is suspended in mid-air, held up by a single, thin rod, like a butterfly pinned to a board. As with any good magic trick, it loses a little bit of impact once you know the secret, but it’s still an impressive mechanism: the automatic movement is powered by an oscillating weight slung between the two long sides. Constant force is transmitted to the flying double axis tourbillon via one of the short sides, which connects the two parts of the movement. It’s an incredibly technical solution to a question nobody else has ever asked.

The most complicated of Thomas’ movements, the triple axis, contains 398 parts. And that’s just the tourbillon itself. With increasing complexity comes the need for innovative geometry to solve spatial restrictions. Working with computer-aided design and manufacturing (CAD/CAM) allows watchmakers such as Thomas Prescher, Roger Smith and Greubel-Forsey to machine the intricate parts they need to build their micromechanical marvels. While some elements of the industry have invested in CNC technology to increase volume, Thomas uses his for precision work; in doing so, he often asks the machine to operate in ways that are seemingly impossible. 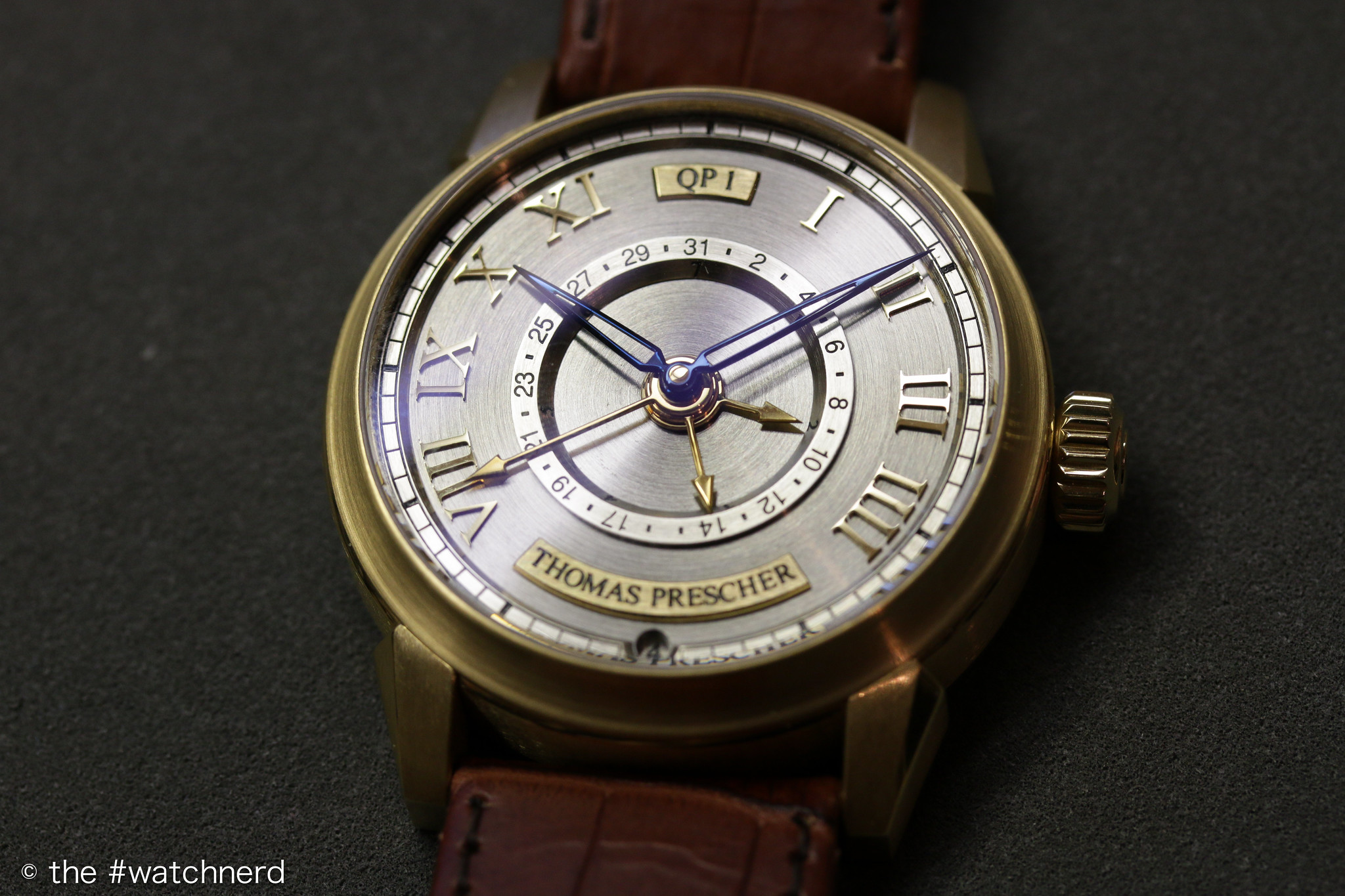 Sat at a desk, in Thomas’ family home, he begins to take us through a new version of the Nemo Sailor on screen: a 3D model of the watch hangs in space, twisting, turning, pitching and yawing as Thomas moves his mouse. It’s fascinating to see the detail that has been rendered on the model; each of the screws that holds the name plates on to the dial are there, shining with that strange, otherworldly computerised glow. I ask about the mechanism: is the movement modelled as well?

He opens a file and begins to explain his latest watch, the Nemo Sub 1. It’s as if the scales have been removed from my eyes as I suddenly appreciate what Autodesk and other computer-aided design tools can actually do for the watchmaker, allowing them to see each component interacting with its neighbours and the whole; these movements actually run, virtually. As Thomas uses the mouse to turn the escapement, I can see how each element of the design will work. In many ways, its a humbling experience; I’d previously thought of CAD/CAM as a form of cheating but it’s not. It’s a visualisation tool. A glimpse of the future. 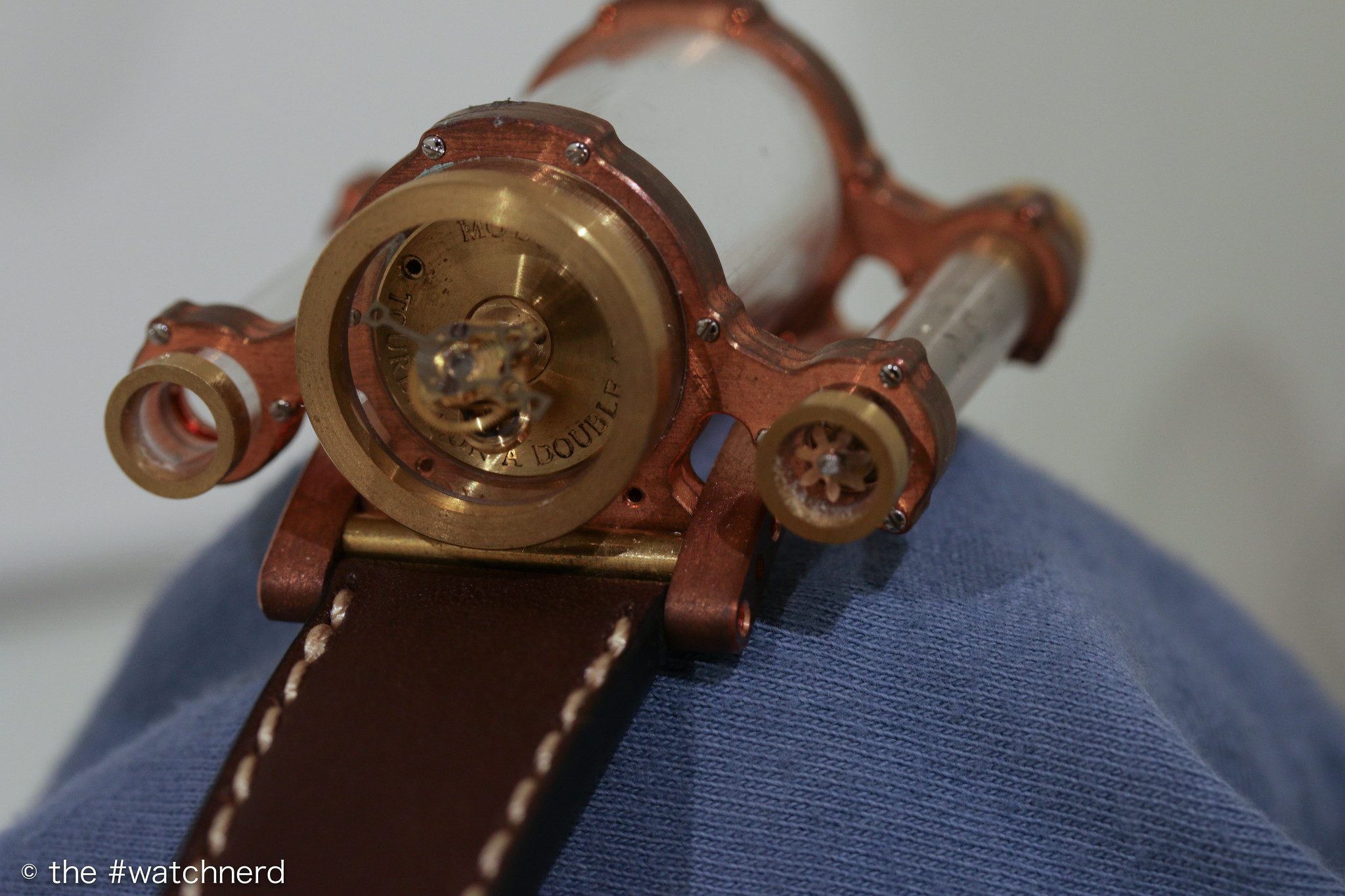 While it may be difficult to describe the man, it’s almost impossible to describe the watches; Thomas Prescher’s pieces operate on a level that is both art and craft. The Nemo Sub 1, limited to just five pieces is, perhaps, the best example of this. It exists (at the time of writing) only as a series of half-built cases and crystals, and as a virtual machine. However, that doesn’t detract from my fascination with this tubular oddity. With its spiral jumping hour and minutes indicators camouflaged as side-pods, or perhaps ballast chambers, the Nemo Sub 1 is wilfully different. The retrograde hour, for example, rotates three times before returning instantaneously to its original position, while winding and setting of the double axis tourbillon is via two large portholes. Opening one of these hatches will cause the crown to rise into position.

“Craft,” Thomas told me, “becomes Art when it loses its sense.”