A version of this post was published on The Modern Gentleman during December 2014.

I’ve been following Thomas Mahon for nearly a decade. When I first stumbled across him in 2005, he was one of very few people in the industry to be writing about the art of bespoke tailoring. Through his ‘blog posts on The English Cut, I began to gain a slightly better understanding of how suits are made, by whom, and at what cost. Indeed, one of his earliest posts gave alternatives to bespoke, in various price ranges. Within months, I was reading about pattern making, suit fabrics, fittings. I followed his trips to the US to see clients, the training of apprentices, and was introduced to his tailors and cutters. The ‘blog was, in short, a revelation (it was also an inspiration to begin the #watchnerd, but that’s another story).

It’s a strange thing, and it was only when I was talking to Tom’s wife Claire at the English Cut Online event last month, that I realised that I’d been wearing a suit almost continuously since childhood: I wore a suit every day at school; I wear a suit to work; and I even had to wear a suit (at certain times) while at university. Suits, it seems, have been the clothing mainstay of the past thirty years of my life. During that time, I’ve bought off the peg, had suits altered, tried personal tailoring and made-to-measure. The experience with the latter has been mixed: Suit Supply, a Dutch company that was founded in 2000 and now has over 50 stores, has been the most successful. I first tried them when they were launching the Cut to The Bone range (now replaced by Suit Up), and have ordered two more suits since. However, I’ve also tried an American-based company with a similar offering, and had a less enjoyable, and far more expensive experience. Suit Supply certainly seem to be able to take better measurements and provide better advice, and while the range of (British) cloths that the Americans had to offer is far from unimpressive, the fit was poor. It’s the one time that I wish I wasn’t so English; I really should have just sent it back.

But back to Tom. In July of this year, English Cut announced that they would be selling made-to-measure suits at £425 (approx. 700 USD). This is a pretty decent price in anyone’s book: Gieves & Hawkes start from £795; Cad and the Dandy at £550 (for a machine-made suit); even Suit Supply’s Suit Up range starts at £469. In order to gauge interest, and, one supposes, ensure that there would be enough interest, a “pledging” system was used (not unlike Kickstarter / Indiegogo). I chose the Business Double – two suits, two extra pairs of trousers or a waistcoat and two shirts – and booked a time to be fitted during their London Launch Event. The “pledge” even suggested bringing along someone, a tailoring-plus-one. I must admit to being slightly skeptical, but at the same time, rather excited. After all, I’d just pre-purchased two suits from a well-respected tailor, received a pretty good deal, and, potentially, might actually get to meet Mahon at the launch.

Tomas Mahon has, variously, been the Prince of Wales’ tailor, worked at Anderson & Shepherd, set up his own label (English Cut) from a base in Cumbria, started a family and launched a successful Anglo-Indian suit venture. While this latter enterprise has, I’m assured, been very successful, it was taking up too much of his time (the range is now sold as Whitcomb & Shaftesbury). This latest line has been “curated” by Mahon, features all English wools and the ‘soft tailoring’ associated with his (and indeed the Anderson & Shepherd) style. Oh, and apparently, he makes suits for Jony Ive**.

The event was held in the rather lovely surroundings of the Oriental Club, on Stafford Place, just opposite Bond Street tube, rather than in Thomas’ usual digs off Saville Row and, to be honest, I wasn’t really sure what to expect. My plus-one had unfortuneately dropped out due to illness, and I’d not bothered to think through the consequences of not taking anyone along with me – I’d not expected to write about the experience, but I’d also not expected the experience to be quite so interesting. Previous fittings have, as alluded to above, been something of a mixed bag, but this was rather wonderful, in a slightly out-of-body way.

English Cut had taken two adjoining rooms at the top of the stairs on the first floor. I was welcomed by Claire and offered a coffee, or something stronger, should I need it. The room was set up around a central table, with mannequins dotted around the perimeter; Claire walked me around the room, showing me the range of styles – single or double-breasted – and cloths – everything from plain, through bird’s eye to a prince of Wales check. There was even a dinner suit, although I almost completely failed to notice it, only realising that I’d not seen it after the fitting had been completed. Cloths ranged in weight and material, from lightweight Merino / Kid Mohair to 100% Merino. All are English, and all looked, to my untrained eye, to be high quality. As I spent more time looking at the suits on display, I began to appreciate some of the details: full canvas, stitching, button holes, horn buttons, small loops for the buttonhole.

I was also shown the shirts – fairly straightfoward at this point, in a few colours and two cloths (poplin and a herringbone). Annoyingly, the blue herringbone that was used on a display mannequin was merely for display, so I settled for poplin.

The second room was where the action was taking place; the client fitting. I noticed, to my surprise, that it was Thomas himself who was doing the measuring, aided by a colleague. While I waited for my appointment (I’d been asked to arrive 30 minutes beforehand) I was introduced to tailor Paul Griffiths, Head Coat-maker. He showed me around some of the accessories and paraphernalia they’d brought with them, including a piece of cloth rescued from the Corgi-chewed jacket that belonged to the Prince of Wales, some order books from the tailor who had previously occupied 11 St George St (complete with swatches against each item), and some of the most beautifully patina’d objects I’ve ever seen: cutting shears.

Patina is a word that is currently causing ripples in the world of watches. Rolexes, for example, with dials showing “patina” command high prices. In collecting (or rather watch-buying) circles, patina has come to be applied to the slightly odd effects of faults in the manufacturing process or even water- or humidity. Here, however, was the well-worn brassing of many tens of years of use; a career of cutting.

And then, suddenly, it was my turn.

I was, at once, both nervous and woefully bashful. Would Mahon, whose core business is bespoke, blanch at my overlong chinos and slightly too large shirt? Whatever my initial concerns, I was immediately put at rest. I said earlier that it felt like an out of body experience, and it was; there’s something slightly detatched yet incredibly intimate about the process. Questions are asked, answers given, but at all times there’s the measure, drawing tape through practised fingers, casual yet perfectly correct. Numbers are called out, accompanied by descriptions, strange phrases, like a tailor’s bingo. 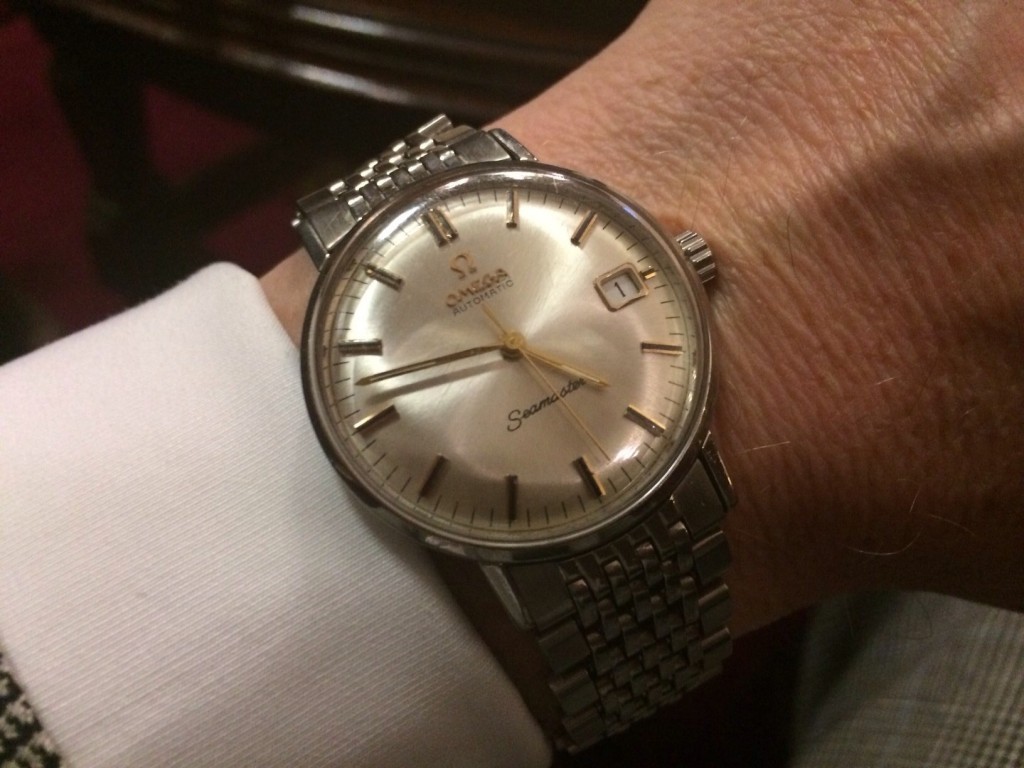 At least [23] measurements are taken to produce an English Cut Online suit; these data are then sent to the tailors to begin making the suit. But to where? Suit Supply is relatively open that its Suit Up range is tailored in the People’s Republic of China; the Whitcomb & Shaftesbury tailors are in Chennai; but were will the English Cut Online suits be made? The answer, it turns out, is another surprise: the suits are made in Japan.

Japan, I feel, is an interesting choice of location and one that should be seen in a very positive light; it is, after all, home to some of the best denim, whisky and food in the world. I wasn’t told exactly where, but the same anecdotes were retold about their attention to detail, and indeed, the particular nature of these new partners. The factory will apparently, only use fabric with which they are entirely happy. For example, Tom sent over some patches of material to be used as labels on the new suit range; the Japanese sent them back. The material had shrunk by a few per cent after the factory had “baked” it for an hour in an oven at 40ºC and 100% humidity.  Every roll of English woollen cloth to be used will undergo a similar treatment at the factory – and be returned if it fails.

Having taken the measurements, the suits will, hopefully, be ready within six to eight weeks; an early Christmas present. The initial ‘Savile Row Style’ collection is made up of 20 suits: I chose a 10.5 ounce (300 gram) plain grey and a slightly heavier 12.75 ounce (360 gram) blue birsdeye. I asked for slanted pockets, and a ticket pocket – a detail I find attractively old-fashioned. Tom persuaded me to go for a waistcoat, even though I haven’t worn a three-piece suit for years; it’s a good excuse to get a couple of pocket watches working.