Before I begin, I feel the need to apologise: this article has taken far too long to write, and also contains far too many hanging prepositions.

I write about watches because I want to, not because I need to or get paid to. It’s the same with all my social media interactions: when I first started ‘blogging in 2005, it was a stream of consciousness, a litany of songs, objects and observations. Nobody read it. Not a single soul. Many of my posts have still never been read by anyone other than me. It was a slightly cathartic response to a series of events, and, for a year or so, it worked. But it didn’t need an audience (and still doesn’t).

Then in 2007, I thought that I might actually start to do something a little more focused. Settling on watches was relatively easy; my interest had been piqued some time before, perhaps ignited by William Gibson’s 1999 Wired essay on eBay, but how to begin? I recalled the approach taken by Jeffrey Steingarten when he became a food critic for Vogue (documented so brilliantly in The Man Who Ate Everything): training. And list-making. Steingarten took his job as a food critic extremely seriously, concocting “a Six-Step Program to liberate [his] palate and [his] soul”. I did something similar, although my six steps were slightly simpler and required fewer bowls of kimchi.

I read. I searched the web. I joined Forums. I asked questions. I visited stores. I chatted. And the more I did these things, the more I found that I really enjoyed it. And more than that, I enjoyed the people behind the watches, and the stories behind the marques. While much of this may be attributed to marketing, no amount of anti-branding snark can detract from the wonder of horology, or the history of timekeeping. It’s the story of how we marked out our daily lives into discrete periods, learnt to navigate the globe with certainty and in safety, began to measure the world of the increasingly minute, and how some of the most extraordinarily beautiful micro-mechanical masterpieces were conceived, built and displayed. Of course, with the rise of the smartphone, all of this is almost entirely pointless, but, to me, mechanical watches remain amazing, if only for the fact that they are so precisely, and so very nearly completely, unnecessary.

However, I appear to be suffering from a malaise of sorts, possibly induced by the miasma that is the world of the “WIS”. When Chuck Maddox and other horo-pioneers started using the term WIS, it was, by all accounts, a very apt description: these guys knew their watches. Intimately and almost entirely. Chuck passed away five years ago, leaving behind something of a legacy; he was one of the first to ‘blog about watches, and to provide freely the kind of technical information that had, until then, been guarded jealously by long-term collectors and manufacturers. In doing so, he opened up the world of watch-collecting to hundreds of thousands of others, while simultaneously creating the modern “WIS”.

I’m not a WIS, I’m just a guy who likes watches. Someone who occasionally gets to meet cool people, see some cool stuff and (once in a while) even write about it. A few months ago, the opportunity arose to visit the workshops  of Meridian Watches, a new company set up by watchmaker Simon Michlmayr and collector Richard Baldwin. Richard also lent me a prototype watch to wear over a period of time, reporting back to them my thoughts and observations, but I’ve not yet written about the experience itself.

The watch I’ve been wearing is a prototype version of the Meridian Prime, tentatively  named the MP-12, and differing from all other Meridian watches, by being completely treated with a diamond-like carbon (DLC) coating. DLC, as you’ll recall, is a term used to describe a number of different materials that display various useful properties, including increased hardness, wear resistance and (perhaps least usefully) slickness. It’s this latter property that struck me first; the DLC coating provides a very tactile surface to the MP-12, as well as a very attractive one. The black is absolute, and contrasts markedly with other DLC watches I own, which chip easily and quite often appear dull. The surface of the dual-layer sandwich dial on the MP-12 is also new and appears to have an almost satin finish to it. With its bright white hands and massive domed crystal, the watch is not subtle – it’s a monochrome behemoth on the wrist, and is easily the largest watch I’ve worn at 46.5mm, excluding the prominent crown.

Meridian don’t cut corners, but if they did, they would cut them in-house, on a lathe, by hand, having first created a bespoke jig. Everything on these watches has been hand-machined, -polished, -edged, -engraved, -assembled or –coated. There’s a slightly obsessive focus on doing things themselves. My fellow #watchnerd Horologium accompanied me to Norfolk earlier this year, and commented on their “drive and desire” but it might go further than that. There’s an almost fanatical devotion to the production of watches that meet Simon and Richard’s ideals. This translates into processes that often stretch far beyond expected manufacturing norms. Take, for example, the production of a Meridian watch case. The back of each watch is engraved with a stylised globe and United Kingdom centred on Greenwich; in order to ensure that the Meridian remains vertical, and that the watch far exceeds the stated 1000ft WR, each screw-down caseback must be machined precisely to fit a corresponding case. In practice, this means that the case and back are milled in Norfolk from a single piece of metal, and must be numbered so as not to lose the pairing through the extensive treatment process. These numbers never make it to the finished watch, being removed before the final polish, but it illustrates the approach taken by Simon and his watchmakers. 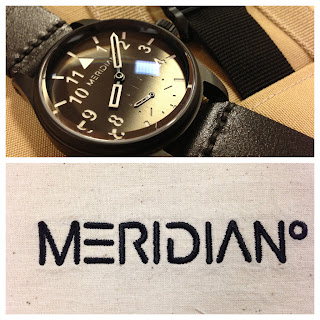 The handwound movement, so callously covered by the caseback, is built from new old stock (NOS) ébauche parts. I’d never really considered what it means to assemble an ébauche Unitas movement before, but having spent some time with Meridian, I have a new-found respect for their watchmakers. Unlike the simple, “regulate and drop-in” approach taken by so many manufacturers, each part must be inspected, cleaned, polished, bevelled, treated, frosted, engraved and coated. It’s a lengthy process which includes the bevelling of the bridges by machine and by hand (the inside edges cannot be done any other way), the removal of the original plating and re-frosting in the traditional English style, hand-engraving of the “Meridian” lines (which then require a complete re-strip, clean and replate). The screws are meticulously cleaned and blued by hand, and the movement assembled and timed (max -1s / +4s per day overall). And all of this takes place in a few rooms in a large warehouse outside Norwich. The price of these watches reflects the work put into them, but there is an approach taken by Meridian that borders on the obsessive. There’s a new 100 Hour Power Reserve model on the way (they’re getting between 103 and 108 hours out of each movement at the moment), which is driven by two, end-on-end barrels, with the power being regulated by a hand-made differential. And then there’s the in-house automatic… It’s all rather impressive, to be honest.

When I was first loaned the MP-12 prototype, I really wasn’t sure that it was my kind of thing. It’s huge, for a start, and almost wilfully utilitarian; the hands are thickly lumed, and lack the finesse that one might expect from a watch that costs a shade under £5k; the massive crystal is treated with an anti-reflective coating that picks up every smudge, and therefore requires polishing almost constantly; the Gasgasbones canvas strap that is supplied as a secondary option doesn’t quite hold the watch in place on my wrist, perhaps due to almost excessive lug-to-lug dimensions. But I still wear it. And wear it a lot. It’s not perfect, but it is fun.  It’s tough, reliable and it makes me smile; from what I hear from Richard, there are quite a few others like me.

I’ll be sad to give it back, to be honest: I’d not expected to bond with it quite so much. But that’s one of the reasons I like watches – these mechanical marvels still have the capacity to surprise.