An interview with Tom Ashton

An interview with Tom Ashton, whose watchmaking ‘blog is currently following the development of Tom’s second watch – the Ashton A2 – using a re-worked Unitas movement.

the #Watchnerd: Tom. Thanks for talking to me and providing some insight into your extraordinary plan to build an Australian wristwatch. If I may start at the beginning: why watchmaking? 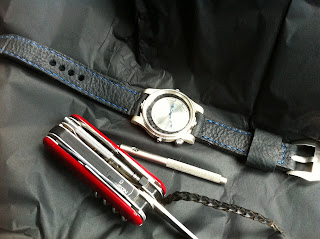 Tom Ashton (TA): Purely accidental, though it seems to have worked out well. I have always had a bit of the tinkerer in me; ever since I can remember, I’ve relished pulling things to bits and even occasionally fixing or having them work again. Not always, but more often than not! I had been working as a clerk with a two hour commute, when my wife spotted the advertisement for a watchmaking apprenticeship, and the rest, as they say, is history. I was lucky enough to do my apprenticeship with someone who valued the repair of mechanical watches over quartz.
the #Watchnerd: What are the best parts and worst parts of the job? 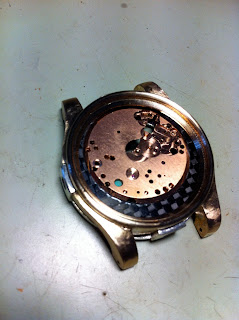 TA: The best part is returning something to life that has been broken or damaged – often seemingly beyond repair – and returning something that a person cares about in as new a condition as possible. In short, it’s making a set of inanimate parts “tick” into being.
The worst is when we receive an abused timepiece, bring it back to life, only to see it returned again, broken. Another less than pleasant element is the state that some people let their watches reach. Any watchmaker should be able to tell you about the “watch cheese” they have seen in bracelets or otherwise attached to watches in the nooks and crannies: not a pretty sight – or smell.
the #Watchnerd: Who do you admire most in the history of horology and with whom would you most like to work?
Historically, I would love to have worked with Harrison, though he does come across a bit grumpy. In a contemporary setting, I think everyone wanted to work with George Daniels, though I think realistically I would love to work with Roger Smith. My original watch design included a co-axial escapement, and hopefully I will get to a point where I have the necessary skills or work experience that I could be useful to him. Although by the time I do I hope to have my own pieces in production, so perhaps a collaboration would be more of an option, like an English/Australia version of Maitre de Temps. I do admire all of the independents for going out on their own, especially people like Peter Speake-Marin, Vianney Halter and others that have really stamped their own style on the watchmaking world in an unmistakable way.
the #Watchnerd:  Which brings us nicely to your watch. Can you talk us through the A2?

The A2 is the result of over seven years of design, though the original design was for a barrel/tonneau shaped case, this proved unfeasible at the time I started working on a physical watch and making a complete watch from scratch wheels and all was going to be very expensive to do. The A1 was the first incarnation of this watch, but apart from being just a little large (based on a Unitas 6497) the case design had a few issues also, so instead of trying to improve the design I decided to start from the beginning with a smaller movement and case. (The A in A1 & A2 is from Ashton, I had originally thought of using T for Tom, but the font I had used to engrave the dial on the A1 looked too much like an existing companies previous logo).

the #Watchnerd: What’s the most interesting horological advance / trend of recent years?
I tend to think that there is not a lot of really new things that will have a long-lasting effect in the horological world, though I would love to see the combination of George Daniels’ co-axial escapement, and Steven Phillips’ EWS [Eternal Winding System]. Most of the things that the major manufacturers are coming out with seem to me to be refinements of old ideas, new materials for doing old jobs, or re-makes of their past glories. Not saying I don’t like what they come out with each year, and the work involved in the production of these is certainly impressive. I see it as a bit of a disappointment that the market expects new and better things every year, it reduces the development time available to the manufacturers, the Harry Winston Opus series are a great example of this where it can be some time between the initial release of the concept, but some years before they actually have time to work out how to make it work.
the #Watchnerd: The A2 has a very distinctive bridge – can you explain a bit about it?

The original design for my watch was that all I wanted people to see was the barrel and balance of the movement, to add mystery to the mechanism, definitely with some inspiration from Girard Perregaux’s Three Bridges Tourbillon. The bridge design is shaped to maximise the view of the barrel and balance, while allowing support for the centre wheel and rest of the wheels in the watch, though not the most effective use of the space, it has a great visual impact, and by complimenting the curves of the main bridge with similarly shaped barrel and balance bridges, it does become very distinctive. It does create some interesting problems though and when I started to use the Unitas movements for parts rather than trying to machine all of the wheels etc to start with, I also had to include the centre wheel in the visuals, as remaking the pinion is not feasible at the moment.. while this isn’t as clean as the original design, it still has some of the mystery about the workings.

the #Watchnerd: Are you a collector? What is your favourite piece?

TA: I’m a collector when my budget allows, though recently any money I’d like to spend on watches gets spent on tools or parts for prototypes of my watches, so my watch collection mainly consists of watches I’ve been able to buy cheap and restore, or that I haven’t been able to pass up.  I have two favourites, both Omegas (apart from my A2 of course). One is a c.2000 Omega Dynamic chronograph, it is just a clean looking, yet still very effective and highly undervalued watch. My other favourite is an Omega steel manual wind watch, containing their stunning 30mm movement, regarded by some (including me) as possibly the best mass produced manual wind movement ever made.. again, a very clean looking watch, with no frills (also no water resistance) though this doesn’t get half the wrist time it deserves, my brother had worn it for almost 3 years solid with no ill effects, including doing handyman work.

the #Watchnerd: What’s your next purchase?

TA: Watch-wise I’m currently looking at a vintage Tudor Submariner, to restore and probably wear. I have my eye on another watch as well, but that may not happen. Otherwise I am looking to upgrade some of my workshop to make producing multiples of the A2 parts a little less convoluted.

the #Watchnerd:  What’s next for the A2?

TA: I have a 2nd model A2 that I am working on, with a bronze case and sterling silver back that I’ll be putting a hand-skeletonised Unitas movement in. Ideally in the near future I’d like to pre-sell some of the A2’s, though my initial run will have automatic Soprod A10 movements (as used by Stepan Sarpaneva), this initial run will hopefully pay for the equipment that I need to purchase to finish the “proper” A2, with the re-worked Unitas movement. I plan to do a series of 10 with the 30mm Unitas 6310 I have, and once I run out of those, will see what happens.

the #Watchnerd:  Would you ever buy a digital watch?

Definitely! I own three digital watches, though I have bought only one of them. A Breitling B-1 which is the most accurate watch I own, an IO binary watch (more for the gimmick than anything else) I also own a Ripcurl tide watch. I think that digital watches definitely have their place, and have no issue recommending digital watches if the circumstances warrant it, I still think Casio G-shocks are one of the best watches out there for durability and reliability,

the #Watchnerd: How important is the movement to a watch?

I think the movement really is the watch: the case can be worn out and be replaced; the dial can be damaged and re-finished; but the movement (unless something really bad happens) can stay the same. I have been guilty of opening a watch, taking pictures of the movement and completely forgetting to make a record of the dial side of the watch. It should be noted however that without a decent designed case and dial the movement will never be distributed enough for people to ever see.

TA: Watchnerd, in my mind WIS’s tend to get more obsessive than I do, while I appreciate differences in models/years of manufacture for some watches, some just go a little bit nuts ;-)