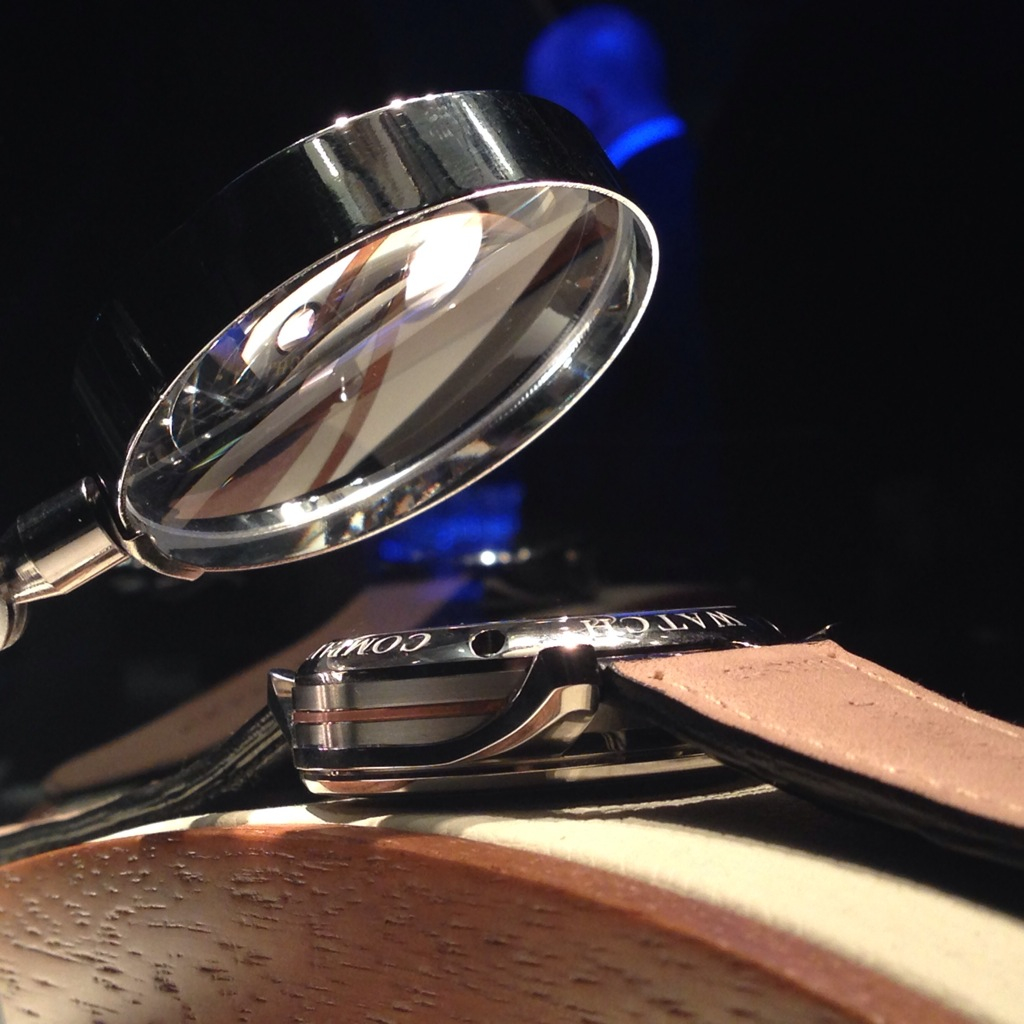 When the English brothers took to the small stage in the Science Museum’s Flight Gallery last Wednesday evening in front of an invited audience of Bremont owners, retailers, press, ‘bloggers and their staff, it was to announce, with some pride, their latest limited edition. In what has become an annual tradition, Bremont has developed a series of watches over the past three years that have incorporated historically significant items: oak and copper/brass from HMS Victory; paper from the code-breaking bombes in Bletchley; and now some of the original 1903 wing-covering material from the first ever powered flight – the Wright Flyer.

However, rather than containing an unusual movement such as the Victory’s double retrograde display, or the Codebreaker’s flyback chrono, the Wright Flyer is to include Bremont’s first “in house” movement – the BWC/01 – an automatic time-only calibre with subsidiary seconds and a fifty hour power reserve. Giles went on to explain that Bremont owned the movement design and that they would be developing it further in Henley, where they also planned to build a new facility and double their workforce to 120. As a long-time follower of Bremont, an owner, a #watchnerd and an advocate of British watchmaking, this was incredibly exciting.

At the time, I Tweeted the following: “.@Bremont own the design of the new movement and will develop in the UK“

I read into this that Bremont had been working with a third party – I presumed La Joux-Perret given the previously leaked material that had surfaced that morning, as well as their close working partnership on previous movements. However, here was a public statement that Bremont had purchased a movement – not just bought-in movements to use in their watches – but actually purchased the IP and design rights to a movement that could become, over time, the beating heart of a British watch. I recall Roger Smith saying at Salon QP last year that British watch manufactures may initially need to buy-in expertise from Switzerland in order to rebuild British watchmaking**; perhaps, I thought, this Anglo-Swiss movement might herald the beginning of such a renaissance.

Unlike the journalists and ‘bloggers that attended (and many more that did not attend) I had not received the Press Release in advance. I was largely unaware of the details, and I had not previously drafted a “review” of the Wright Flyer, that could be posted online as soon as the embargo was lifted. Instead, I caught up with some friends and acquaintances, met some interesting people and settled back to enjoy the evening under the spread wings of Alcock and Brown’s Vickers Vimy biplane.

Over the next few days, a number of things appear to have happened, including some pretty unhelpful and largely uninformed discussions on various forums and ‘blogs, but it’s become clear that the statement given by the English brothers on the evening was not entirely consistent with the Press Release they sent out, nor other marketing material they had published on their website. In particular, Bremont appear to have given the impression that the movement was “in house” – the definition of which in watchmaking terms is pretty fluid at the best of times – and that they were manufacturing parts of their BWC/01 movement in Henley. Comparisons abound over the similarity of the BWC/01 and a series of La Joux-Perret calibres for Arnold & Sons; to me, this is a red herring. The familial resemblance is not a smoking gun, nor indeed even unexpected – to anyone who attended the launch, it would have been clear the route that had been taken (i.e. that they had purchased a movement design from LJP). However, many observers and ‘blog readers appear to equate “in house” with manufacture d’horlogerie, a particularly Swiss/French description of a movement that is made entirely (or almost entirely) by the watch company, in their own production facility, rather than by others on their behalf. Of course, the incredible price point at which the Wright Flyer and its historically important contents are being sold, merely fanned the internet flames.

Bremont’s aim here appears to have been (as stated repeatedly during the past seven years) to raise themselves, over time, from an atelier de établissage, into manufacture***. Unfortunately, their marketing material appears to have got slightly ahead of their actual activities: the use of the future tense by the English brothers (see quote above) appears to be far more fitting than their description of their involvement in the actual manufacturing of the La Joux-Perret movement, and, more worrying, they have had multiple bites at the cherry in terms of trying to correct this misunderstanding. I say misunderstanding, because I do not believe that they intended to deceive. However, Bremont (like many other watch companies) have a poor history of communicating accurately the details of their watches, the modifications they make (or are made on their behalf), and the processes or third parties they use. The industry-wide opacity, behind which many have previously hid, only compounds the issue.

What is clear is that Bremont’s communication was contradictory, muddled and misleading; the revision of their description of what is actually produced in Henley (and by extension, the reason behind having London on the baseplate) is particularly concerning. The statements that have since been made to clarify the situation have had to be amended, or further “clarified”, which only increases the frustration. However, at the same time, it is also abundantly clear that very few individuals outside of the watchmaking industry truly understand what really goes into the pieces upon which we, the consumers, lavish so much of our time, money and attention. Whilst I have always sought to provide an independent view of the watchmaking world, I have become increasingly drawn into it, meeting many wonderful individuals and making some very good friends. I strive to be even-handed, fair.

To quote Roger Smith again (from the talk entitled Against All Odds, at Salon QP last year) “I think ultimately what we’ve got to do, is we’ve got to be honest. The public aren’t stupid, and we’ve got to be very honest with the general public and start off on the right footing, if we’re ever wanting to build … a watchmaking industry. Ultimately we need to be making our own mechanisms, we need to be designing our own mechanisms. After all, that is what the British watchmaking industry was original built on, and unless we can get back to that sort of level, then really, there is no watchmaking future.”

** “Ultimately, you’re going to have to bring Swiss expertise in – they know how to mass produce movements: we don’t.”

*** The B-1 marine clock movement designed by Peter Roberts showed that they had the capability and desire to move down this route at an early stage. It’s disappointing, from a personal point of view, that none of the B-1 design elements appear to have made it into the BWC/01

Disclosure: my wife and I were guests of Bremont at the Science Museum; canapés and alcoholic beverages were provided. No travel was provided. A gift bag contained a Bremont USB, a copy of the Bremont Newspaper and a Bremont-branded lollipop.