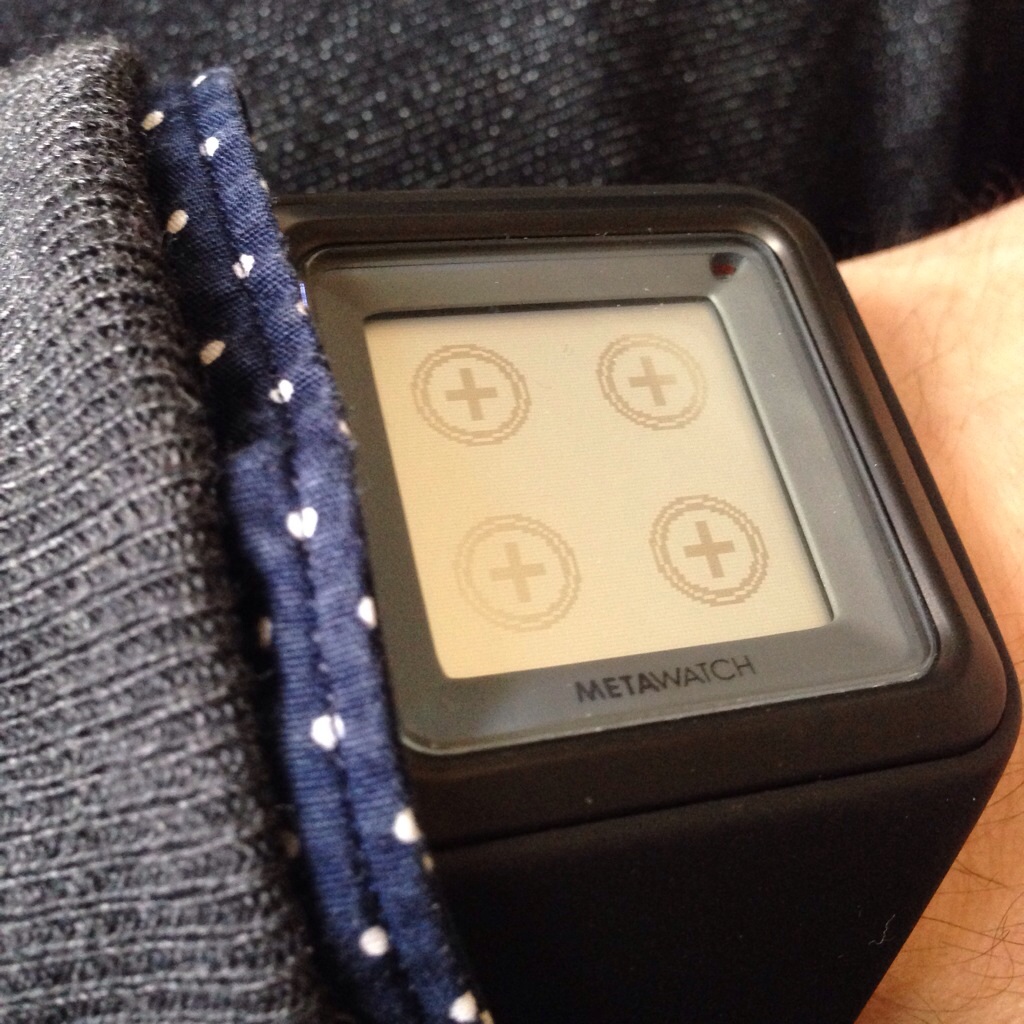 Is this the end of the Tamagotchi Gesture?

Every five or six weeks for the past year, I’ve been inserting a MetaWatch Strata into my watch-wearing rotation. This isn’t a particularly strange thing for a #watchnerd to do: we often rotate our watches, and one of mine happens to be #smart.

Wearing a mechanical watch that’s been off the wrist for a few weeks is generally a simple affair, and usually requires no more than a gentle shake or a few brisk winds, a fiddle with the quickset date and the all important time check. With the Strata, it’s a little different. Although battery-driven, most smartwatches fail to hold their charge, dissipating energy over a few days to become the equivalent of wrist-mounted paperweights.

You must prepare a smartwatch, ensuring that you insert it into its cradle, or, in the case of the MetaWatch, attach its charging clip, at least eight hours before use. Then there’s a quick check to ensure that the iPhone app is up to date, and that there’s no new firmware to be flashed to the watch.

Once fully charged, it’s a simple case of activating Bluetooth, pairing the devices, and waiting for the comforting vibration of success. Wearing a smartwatch requires planning. It’s the equivalent of flicking through the Fat Duck Cookbook  when you feel like a quick meal and realising that there’s nothing in it that doesn’t require a 12-hour sous vide process. It’s why I tend to go a few days with it on the wrist – there seems little point in just wearing it for a single day, or to a meeting.

Once on the wrist the following points become apparent:

What does this mean for smartwatches? Well, I don’t see these as insurmountable. ‘Phone and watch battery life is, by all accounts, much improved in recent releases such as the Samsung Gear 2 and the LG G Watch (running the always on Google Now), as well as MetaWatch’s META. Contactless charging may also be introduced in forthcoming models, though systems such as Qi. It’s also possible that the “watchiness” of the smartwatch is finally beginning to show through. The Moto 360, for example, is traditionally styled, in that it’s round (the clue was probably in the name).

Is the simple circle the answer? I’m not sure. The shape is almost incongruously striking; one wonders why there have been so few smartwatches before that have attempted an annular design. One imagines that it significantly impinges on useable space, so perhaps we’ve just not yet seen the creative side of app / UI developers?

Which leads me on to my third point: there really is no killer app. Notification in and of itself is generally no reason to buy or indeed wear a smartwatch. As a perpetual office worker who is required to wear a suit, I find that the majority of colleagues who possess wearables (ABC watches, runtimers, fitness devices or similar) have an active lifestyle. They want to wear their devices because they are useful – whether at work or at home, it doesn’t seem to matter. As many are semi-permanently attached to their desks via a mouse, a notification device is probably low on their priorities.

Wearing a smartwatch is a commitment, or possibly even a ceding of power; you are almost surrendering control of your life to the device. With a ‘phone, you can turn it off. Leave it behind. Bury it in a bag. Smartwatches want to change that. Bluetooth tethering requires one to wear the watch and carry a ‘phone. And rather than choosing when to receive messages, the majority of smartwatches appear to be always on, pumping messages to the screen with little filtering or prioritisation. Wearables remove control from the wearer and give it to the device, or possibly the manufacturer**.

However, when I am away from my desk, and especially when I literally have my hands full, I relish the ability to see, at a glance, whether I need to dip into a bag, pull something out of a pocket or just ignore the message. For me, this is a relatively rare occurrence and it reduces the smartwatch to a tool, rather than a timepiece. In the same way that I don’t need to wear a dive computer to the office, I generally don’t need to wear a smartwatch: the need isn’t there.

The watch industry – and in particular the luxury watch market – does seem to be driven by need. Whether it really is a desire to signal one’s self worth, or simply the desire to own, many of the people I have met who have more than one watch do so because of need.

However, in much the same way that Sonic made me want a Mega Drive, or Goldeneye an N64, there is nothing that makes me want to buy a smartwatch. Admittedly, I was anti-iPod until the click wheel, so perhaps there’s a precedent here: I didn’t want an iPod until the action of scrolling felt natural. Perhaps, due to a deep-seated love of (nearly) all things horological, it’s the fact that smartwatches still don’t look or feel like watches.

And it’s this latter point that is paramount; watches are – to me at least – as much about the feeling as the filling. As William Gibson’s friend John Clute said of mechanical watches, over fifteen years ago: “they’re pointless yet needful, comforting precisely because they require tending.”

In the future, smartwatches may no longer require tending, but instead begin to feed us, marking the end, perhaps, of the Tamagotchi Gesture.

** An extreme example was when MetaWatch decided to use the platform to send “notifications” relating to the release of World War Z to their customers. Directed adverts, possibly using iBeacon / Apple iWatch, cannot be too far off.