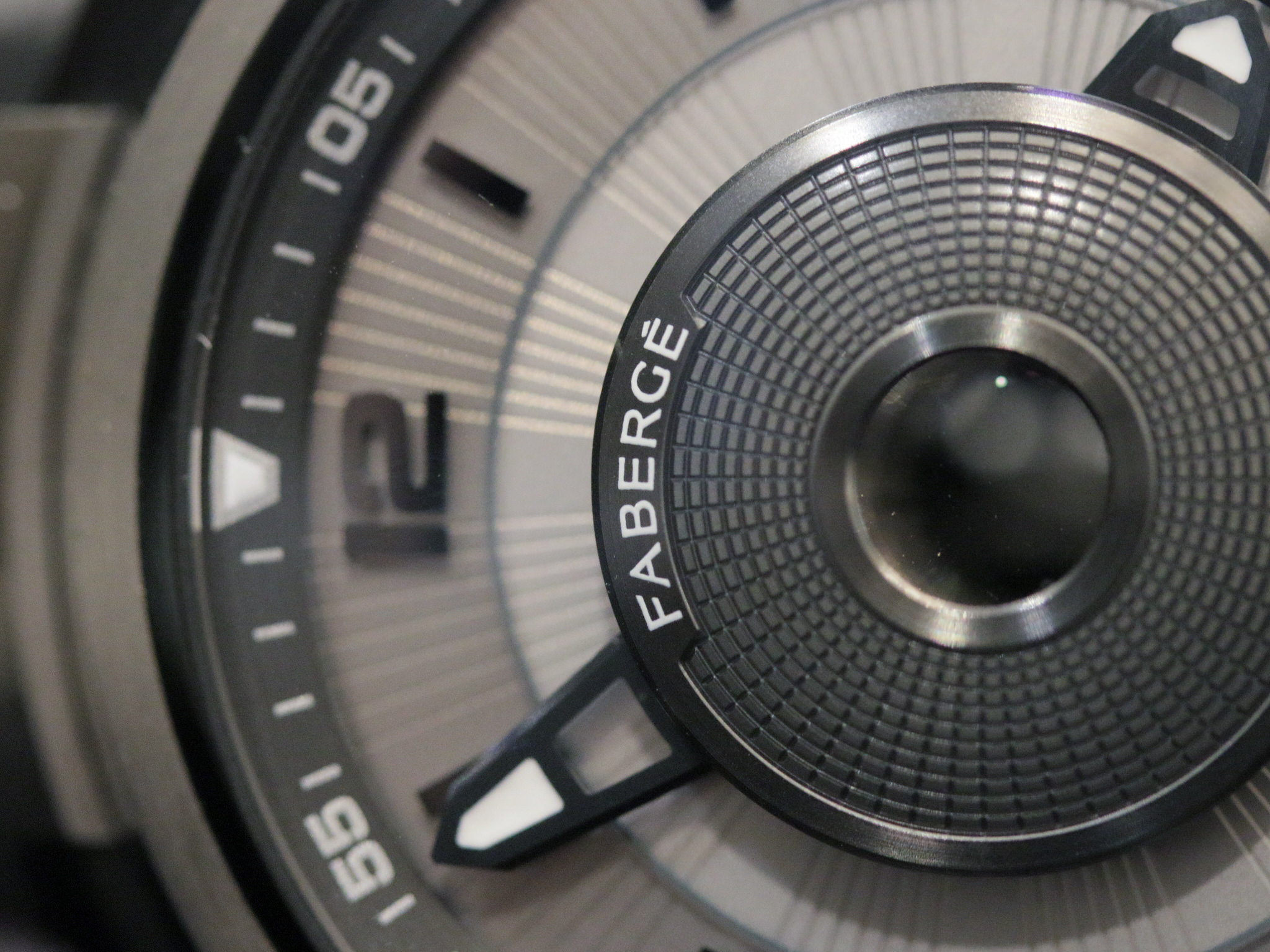 Looking to the future: Fabergé’s visionnaire

However, it was the Lady Compliquée Winter that stole the show.

This watch, which uses the same Agenhor AGH-6901 movement as the previously released Peacock Compliquée, displays time via a rotating hour ring and series of retrograde blades. In the Winter watch, these blades are beautifully lacquered shards of blue snowflakes, that slowly fan open as the hour progresses. It’s a charming piece, and a wonderful complication, powered by an exceptional movement (for more about the watch, its movement and to see it in action, please read Elizabeth Doerr’s piece on Quill and Pad).

Fabergé is now owned by Gemfields and Pallinghurst Resources (a specialist natural resources investment company, who has a cross-holding in Gemfields) and has started to blend cutting edge movement design with historical references (the Winter watch is a nod to the Fabergé egg of the same name, that sold for a (then) record price in 2002). But the story behind this resurgent brand is far more than just the raiding of the corporate back catalogue.

The person behind this extraordinary renaissance is Aurélie Picaud, who was tasked with rebuilding the Fabergé watch brand in 2013 following the change in ownership.  Having previously worked at Swatch Group (Omega) and Audemars Piguet, Ms Picaud appears to have hit the ground running, assembling a list of names to support her vision for a forward-looking, exciting global watch brand. Giulio Papi, master engraver Dick Steenman, Jean-Marc Wiederrecht’s Agenhor SA and Vaucher Manufacture (to name but a few) have all been brought on board.

The results speak for themselves. The DTZ, for example, manages to blend high end optics with a unique method of displaying the second hour, while the Lady Compliquée range uses a three dimensional retrograde blade system to indicate the passing of the minutes. Jean-Marc Wiederrecht’s team appears to be relishing their work for Fabergé.

I was introduced to Aurelie last week  at the Eve’s Watches Women’s Watch Awards. On Ms Picaud’s wrist was a 36mm version of the Lady Levity, a beautifully balanced piece that incorporates an unusually large central cap that covers not only the canon pinion and hand collets, but extends across the dial. Onto this cap is printed one of my favourite motifs, a man in the moon. The printing technique is unusual in itself, utilising a patented process in which a substrate of platinum is overlain by mother of pearl (sourced from Australian Pinctada margaritifera, apparently). The effect is quite subtle, and utterly beguiling: two golden hands – a spikey rising sun and beautifully curved crescent moon – peer from behind the disc, floating in the clouds.

As you’ll probably recall, I’m relatively new to watches, and over the past decade, I’ve rarely covered women’s watches (or the people behind them). Fabergé and the recent Eve’s Watches Awards have opened a doorway to a slightly different world. It’s one I rarely inhabit, but hope to spend more time visiting. It’s about time, after all.