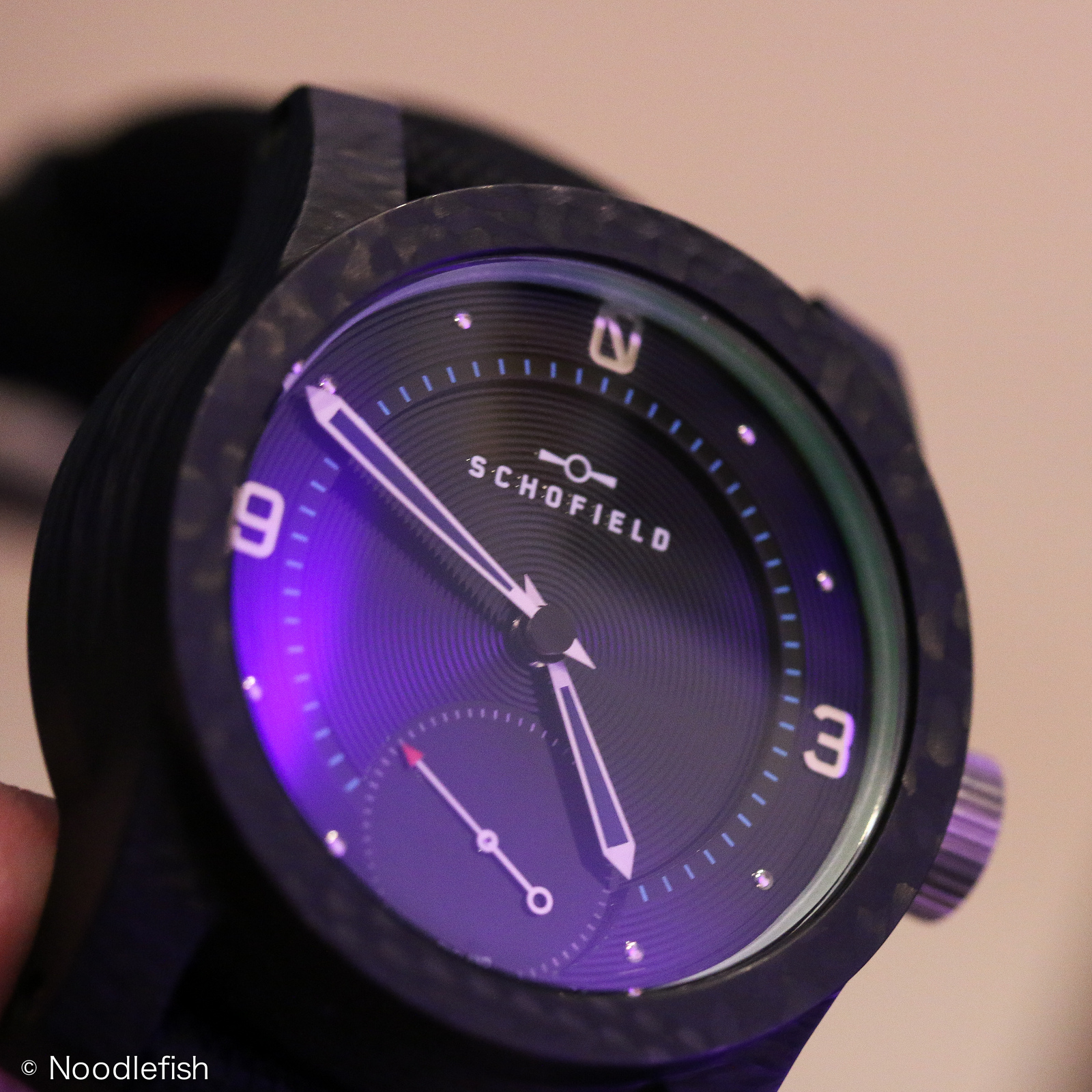 When I first met Giles Ellis (creator, owner, guru) and Matt Hopwood (designer, musician, collector of English love stories) at SalonQP almost three years ago, I was struck by two things: their beards. Actually, I was struck by their watches (the  Signalman) and their passion. Whether they were describing the angle of the chamfered case, the exact dimensions of the crown, or the aluminium cigar tube that they included as a gift for the first few buyers, it was all about the design – or rather, the integrity of the design. From the Signalman watch box to the highly embossed business cards, from the handmade strap changing tool to the height of the domed crystal, from the power reserve indicator to the use of zero at twelve, every element of the watches, straps and paraphernalia had been designed. Nothing had been left to chance.

Fast forward two years, and I had a similar experience with them at the launch of the Blacklamp watch at SalonQP. Working collaboratively with a collective of like-minded makers, Giles had assembled a truly bonkers watch; while the movement (ETA/Unitas 6498-1 with hacking mechanism) was fairly pedestrian, the dial and case were most certainly *not*. The latter, milled from a block of carbon fibre composite that had been specifically created for them (Morta(TM)) was that most unusual of materials – something man-made, yet organic. There’s an almost wood-like appearance to the polished Morta, whose grain weaves delicately through and around the case. Rivulets of lighter and darker areas play in the light, like the sun on the water.

In a stroke of genius that sets the Blacklamp firmly on the vanishing point of the nexus of niche, the rehaut was replaced by a hand-turned ring of high tech man-made photoluminescent polycarbonate called Moon Glow (TM) which illuminates the watch from within, rather than relying on lumed hands. The Blacklamp even comes with a torch, to allow the owner to fully “charge” the watch.

Suffice it to say that the first Schofield watches have been two of my favourite pieces from the past five years, watches that might just be a perfect illustration for my Six Small Words pieces.

But, as with so many watches and brands to which I’ve been introduced, it’s not just the physical product that’s important. Behind everything that Schofield has so far released has been a man, and, perhaps, a vision. I think I may have discussed the ‘cult’ of the independent watchmaker before, that frisson of excitement and vicarious thrill that so many collectors and watchnerds seem to enjoy. I’m not talking about a Miltonian conversation, nor that between the monster and Frankenstein, but rather the connection, that reflected something, that so often occurs when discussing a creation with its creator.

Last week I attended a small gathering in the basement bar of Blacks in Soho. Huddled in a corner was a man fettling nibs: John Sorowka is a member of a highly unusual profession, a nibright or nib technician, who is able to coax the best out of all manner of fountain pens. This art (or is it science?) involves flexible plastic sheeting of the kind I’ve seen locksmiths use, blocks of Arkansas stone, emery boards and blotting paper. Nibs were ground, straightened, nudged or nurdled into free-flowing perfection.

Giles was also there, proudly explaining the story behind Schofield’s new fountain pen, a large, black, classically-styled cylinder of acrylic, silver and onyx. There’s something timeless about pens, almost anachronistically so. Like watches, diaries and pocket calculators, refillable ink pens belong to a family of objects that has been largely replaced by ‘phones, tablets or computers. In a world that’s increasingly focused on electronic communication, the very act of writing with a fountain pen has become relegated to those who prefer, perhaps, the slow life. It may also be a deliberate push against the tide, a wilful refusal to accept the modern ways, but instead a focus on that most personal of activities, handwriting. One can tell a great deal, it is said, about a person from their handwriting. Might it also be said that you can tell a great deal about that person from their choice of handwriting implement?

The pen illustrates a theme that runs through Schofield’s designs: integrity. It balances form, functionality and purpose, while also being more than the sum of its parts. At its most basic, the pen represents an homage to another design; Giles has taken a British-produced Onoto nib as his base, and made the pen his own. The clip, silver-plated beryllium-bronze with an enamelled inlay, is a reflection of the hands used in both the Blacklamp watch and the upcoming Beater. The black onyx cabochon reminds me of the cap that covers the centre pinion / collets. The engraved “Sussex and England” echoes the increasing sense of place that Schofield is building (both metaphorically and literally – they are moving to a larger Sussex-based site soon), while the box – a heavy wooden rectangle of Zebrano and Sapele woods – apparently illustrates a focus on higher quality packaging.

There’s a German noun that I rarely use: gestalt. I think it’s correct to apply the word to the conceptual integrity of Schofield’s designs, but I’m not entirely sure. When I try and describe the elements of, for example, the Blacklamp, I find myself obsessing about the details: the weight of the hands that teeter on the edge of heaviness; the degree of chamfering that almost seems to overwhelm the case; the hypnotic radial guilloche dial that threatens to confuse the eye. Yet, as a whole, the watch works. It’s rare and unexpected. I’ve written about elements of watch design before, but rarely about the whole – unless I’m describing that emotional attraction I have towards certain objects, the romance. As an untrained designer, watchmaker or even writer, I often struggle to convey my thoughts and feelings, and describing these watches is no exception.

It’s possible to draw a line through a single point. In fact, it’s possible to draw a great many lines. In my mind I see a pan-dimensional hyperspace of the kind used to describe biological niches**. The axes define everything, intangible or measurable, from size, price, movement or case materials, to the shape of the watch, the feel of the treated surface against your fingers, or the sound of the mechanism. The addition of a second point, perhaps adding the DLC version to the stainless steel Signalman, assists in the mapping process. Keep adding points for the Schofield lapel pin, the Ladyfinger knife or perhaps a light grey tweed strap, plot the Blacklamp on your axes and then draw a line to best join all these points. I’d be surprised if the line were difficult to fit. In my mind, there’s a cohesion between these points, a commonality. Integrity.

I have no doubt that, when unveiled on the 6th November, the Schofield Beater watch will fall on this line. It may differ completely from the Signalman – the name alone suggests the highly polished case will not be replicated – and it may not be as beautifully bonkers as the Blacklamp, but I’m willing to bet that it will be unmistakably Schofield.

** George Evelyn Hutchinson built on on Charles Elton’s idea of an ecological niche. He defined it as “a highly abstract multi-dimensional hyperspace in which the organism’s needs and properties were defined as dimensions.” I’m further abstracting the idea to use it to describe the niche a watch inhabits. I’m not sure it works. Let me know what you think.