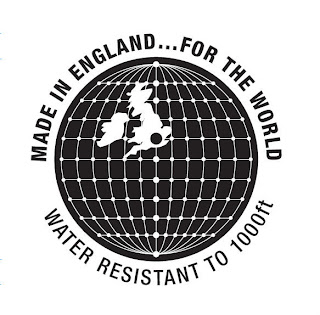 At six p.m. on the 8th November at SalonQP 2012, a new British watchmaking company will show its first pieces. Meridian Watches has been creating a buzz since it joined Twitter  and Facebook a little over six months ago, posting teaser photos and snippets of information about this new range of hand-made British watches. Until now, all that has been known is that this small, Norfolk-based company appears to be making watches by hand from all-British parts, except the base Valjoux / Unitas movement. A preliminary sketch released earlier this month (below) seems to show a two-handed, military-inspired design with subsidiary seconds and skeletonised hands, and I knew form Facebook and Twitter that the company has been working with fellow #watchnerd Robert-Jan Broer at Fratello Watches as their media partner. But I knew little else about the watches, until yesterday, when Richard from Meridian ‘phoned me. In a story that illustrates everything I love about Twitter, Richard got in touch following an exchange of Tweets in July, when I asked about the watches. So I guess this is a bit of an exclusive (to use one of my dear friend Hodinkee’s favourite words). 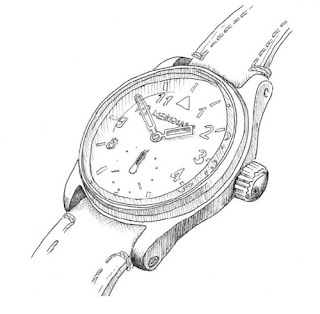 I must admit that I had thought that these watches would be similar to a number of others being currently produced in Britain, taking Swiss movements and casing them in Germany, Switzerland or England, but having spent time talking to Richard, I’m not so sure. Meridian’s approach from the start has been to create a range of truly hand-crafted watches, focusing on watchmaking. Each case and caseback is individually milled from English-made blanks – and they’re good for at least 300m too. The dials are all made in-house. Even the hands have been made, polished and painted in their small workshop in Norwich (they were busy working on these while I spoke to them again this morning). Yes, the base movements are Swiss and modified before casing, but at least two of the three calibres that will form the basis of the range, sport some serious complications, designed and built by Meridian’s team of five watchmakers. Calibre 1 is a fairly standard, 40 hour, Unitas-style manual wind, with seconds at six or nine. But the Calibre 2 and 3 movements have a 100 hour power reserve, and are available in both manual and double rotor automatic versions. The cases will be available in a number of finishes, including a very interesting sounding “Meridian Black” treatment, and the double domed crystals are not only sourced from the UK, but double coated by a company that supplies the military. Even the buckles (which contain at least five separate parts) are entirely made in the UK. In a move that was first seen on the Bremont MBI and II watches, Meridian have also contracted Carl from Gasgasbones to produce a canvas strap that will be supplied as part of the package. All this adds up to a fully fledged range of watches (and indeed pocket watches) that will be available to see at SalonQP and actually purchase a few weeks later. There’s also a watch being created especially for SalonQP, but we’ll have to wait a bit longer to hear about it.

Although I have not yet even laid eyes, let alone my hands, on a finished piece, I am incredibly excited about these watches. You’ll recall that I have been a supporter of many UK brands in the past, and I see no reason why Meridian should not succeed: the opportunities to buy a truly hand-crafted watch in the UK are (currently) rather limited, especially in the sub-£10k market. While Roger Smith, for example, offers incredibly beautiful, bespoke pieces from the Isle of Man, and Peter Speake-Marin produces a blend of modern-slash-traditional watches from his workshop in Rolle, Meridian appear to trying to bring a little bit of that wonderfully English quality to the UK market.

The countdown has begun. I know where I’ll be as that counter hits zero…